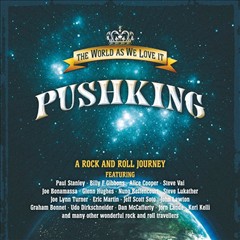 PUSHKING
THE WORLD AS WE LOVE IT
Released Febraury 1, 2011 (Armoury Records)

Review:
Pushking is a melodic rock band that was formed in Russia back in 1994. Virtually unknown in the United States, they’ve gained success in their homeland and have issued a number of recordings there. Before the image of fellow Russians Gorky Park pops into your psyche, let me say that these two bands are nothing alike. Pushking, aside from a noticeable accent from singer Konstantin Shustarev, are highly skilled musicians who write surprisingly strong songs with lyrics that translate well into English. That’s a huge plus, because if you want to be a successful rock ‘n’ roll band you must be able to sing the songs in English and they must also translate well.

In 2008 Pushking took their first foray into recording songs in English when they issued the album I Believe, which was praised by fans and critics alike. That was a huge step for the band, but not wanting to limit himself and Pushking, Shustarev raised the bar even higher when he approached the band about his most ambitious effort to date. The frontman envisioned writing and recording a concept album — one in which he would compose the music but also enlist the help of two Russian poets, Oleg Savilov and Valery Kommisarov, to write all the lyrics.

Shustarev, wanting to go even bigger, gathered what turned out to be an all-star lineup of musicians from around the globe on The World As We Love It. In addition to the members of Pushking themselves, some of the musicians on the album include Alice Cooper, Billy F. Gibbons, Paul Stanley, Glenn Hughes, Jorn Lande, Eric Martin, Jeff Scott Soto, Udo Dirkschneider, Graham Bonnet, Steve Vai, Steve Stevens, Joe Bonamassa, Kerri Kelli and Nuno Bettencourt. An impressive line-up to be sure — but if the songs aren’t there, the big names mean nothing.

The album is a huge undertaking, and Pushking lives up to challenge by delivering an impressive musical piece of work — a balanced mix of power ballads, rockers and adult-oriented-rock tracks with several standout moments. “Night Rider” is a rockin’ number with ZZ Top‘s Billy F. Gibbons on vocals as well as laying down his trademark guitar tone, “Troubled Love” is a catchy power-pop track that keeps things moving right along with Alice Cooper handling the main vocals and his longtime sidekick Kerri Kelli on guitar, and “Cut The Wire” finds KISS‘ Paul Stanley on vocals with guest gunslinger Stevie Salas shredding away.

The verdict is that The World As We Love It arrived with little to no expectations and is a surprisingly good album.