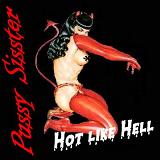 Review:
Pussy Sisster, the sleaze-balls all the way from Germany, have returned with a 4-song demo and a revamped line-up. The band has streamlined from a five-piece to a four member band with only vocalist Alex Sex and drummer Mark Heart surviving the shake-up.

It has been about a year since I reviewed Pussy Sisster‘s Sleazy Things debut, and I am still undecided if I like the vocals or not. The twin-guitar attack of the debut which I liked so much is now gone as Joe Johnson handles all the fretwork himself. But he proves up to the task on songs like “Vampires Of Death” and I don’t notice any difference between the guitar work on this release and their previous platter. There isn’t a bad song on this disc and then again there isn’t one that completely jumps out and grabs you by the throat either (although the last two tracks come damn close).

Simply put, if you liked Sleazy Things you will like Hot Like Hell and vice versa. There may have been a few member changes, but Pussy Sisster‘s sound has remained unchanged. They have neither improved nor gotten worse, they have simply decided to stick to their guns and do what they do best.