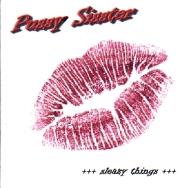 Review:
Here we have another up and coming band vying for the sleaze metal crown – this time all the way from Germany. These guys are dirty and raunchy, and even though I wasn’t sold on the vocals at first, they are really growing on me. However the real strength of Sleazy Things is the twin guitar attack, which really shines on “Afraid” – you’ll have a hard time getting that tune out of your head.

The first two songs, “Sleazy Things” and “Over The Top”, are your typical headbanging rock numbers – but both are very well done. Pussy Sisster slows things down for “Crying”, which fits into the power ballad territory, slowly building itself up for the chorus. Its not very often a sleaze band can get radio airplay, but this song has that potential. “Don’t Go Away” starts off with an interesting beat but doesn’t live up to its start, but the hard driving “Whiskey” ends Sleazy Things on the right note.

Pussy Sisster obviously love loud guitars and fast women, which always seems to make for cool music. I still can’t decide if I like or hate the vocals here, at times I hear promise and at times I hear too much of a punk influence. So I’m going to ride the fence when it comes to the vocals, but the dueling guitars are impressive enough to make me recommend checking Pussy Sisster out at www.pussysisster.de.