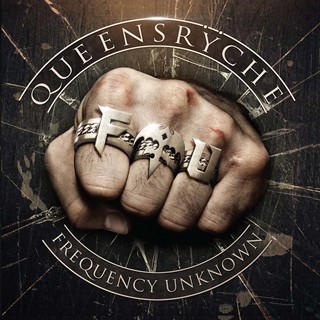 Review:
Truly there has never been a more intriguing and complicated story in rock music, at least in recent memory, as the 2012-2013 duel between Geoff Tate and his band-mates in Queensryche. It’s been a nail-biting saga since news broke of a band fight in Brazil before one of their concerts. Shortly after, a band emerged at two sold-out Hard Rock Cafe events named ‘Rising West’ featuring everyone in Queensryche except Geoff Tate, the singer. To the average fan it seemed like a spin-off side project that performed some of the older songs live with a new singer. All was fine, until a month or so later, when the same Rising West promo photos suddenly replaced their logo with that of Queensryche. If you weren’t ‘in the know’ at the time, it was strange to see a new frontman for this legendary band. In November a court date will decide who is awarded the name, but for the time being there are two Queensryches — the other will release a self-titled album on June 25th through Century Media.

Back-story out of the way, this version of Queensryche features only Geoff Tate and one time guitarist Kelly Gray, who toured with the band and was featured on the album Q2K. According to the shrink wrap on Frequency Unknown it is ‘Original singer, Geoff Tate and Queensryche‘, however the CD itself simply says Queensryche. To be fair, and objective, most would agree this album is an anomaly. This review is of the retail version which is for sale via Cleopatra/Deadline Music, however there is a remixed version that is available through the label for those who email them a scan of their retail receipt, which makes the current CD copies in stores more of a collector’s item.

The album’s credits reveal many, many guest musicians including Rudy Sarzo (Whitesnake), Simon Wright (AC/DC), and Ty Tabor (King’s X), but unless you read the liner notes the unsuspecting buyer would assume this album was recorded by the original 1983-2012 version of the band. My biggest fault with the guest star approach is that the ‘stars’ are not featured on the back cover, which would have lead many more to purchase the album. Carlos Santana had a huge hit with a ‘guest star’ style album called Supernatural in the late ’90s and most rap albums traditionally list the guest stars on the back cover — this is the biggest anomaly of this album, it doesn’t feel special for the guests. It’s disguised as a new Queensryche studio release instead of Geoff Tate and his friends. The uniformed who don’t visit metal websites may be lead to believe, at least until the other Queensryche‘s CD is released in June, that this is, according to the label and artwork, a Queensryche release. Personally, I believe it is those fans that the album is being marketed to, just as David Coverdale releases albums with the Whitesnake name, but further inspection notes it is just him with a team of session musicians. It’s the logo and name that brings people to the table, as is the case here. Unfortunately the guest stars on this album are buried in the liner notes, and not out in front as they should be.

The music is a mostly polished sequel to Tate‘s recently released solo album Kings & Thieves, more than a direct link to any previous Queensryche release. I would love to know if Tate shopped the CD to a more mainstream record label before choosing Cleopatra, as they are more known for ‘tribute’ albums and re-recorded hits packages — hardly a major label for a ‘band’ with such landmark releases as Rage For Order and the three million selling Empire. As a result of the independent label, the album’s chances at worldwide acclaim are probably shortened. The final four tracks on the CD are re-records of four Queensryche hits, with varying results, and have already been complied to make a second release from Cleopatra titled Silent Lucidity: The Best Of Queensryche. The version of “Jet City Woman” is a hybrid of the original 1990 version mixed with 2013 musical elements. It’s a fun listen to pick out the parts the original band played and hear the recent elements spliced together — entertaining to say the least.

Having given the music several fair listens all the way through, “Life Without You” and “Everything” are the real standouts, with tracks like “Dare”, “Slave” and “Weight Of The World” lending themselves to the skip button. “Life Without You” would have been a more suitable ‘Ryche-sounding’ first single than “Cold”, the album’s opener. Some parts of Frequency Unknown even make me long for “Hot Spot Junkie” and “Retail Therapy” from the band’s 2011 ‘Plan 9 From Outer Space’ equivalent Dedicated To Chaos. Those two standouts from that album showcased a creative side of the band, but this new album lead by Tate seems content to settle for the same territory explored by his recent solo album, like I said, making it a direct sequel to Kings & Thieves. Much has been said about the production of the album, and as Poison learned with their studio album Hollyweird, fans really do listen to the mix and production with critical ears. Thankfully Cleopatra noticed the outcry of fans, unlike Poison, and there is the option of a ‘remixed’ CD at no charge.

Frequency Unknown is a decent companion CD to Kings & Thieves, and I believe that will be its legacy among fans. It is a much easier listen with that in mind as the album itself deserves a three star rating, but in the context of it being marketed and sold as a Queensryche release I would have to take away at least one star. I hoped the label would have done a better job in promoting, distributing and marketing the album, on par with, say, Frontiers Records or even a rock label such as Tooth & Nail — sometimes a savvy label can make or break an album. To be fair, Frequency Unknown has potential as a decent release… just not one in the Queensryche catalog.

Reviewed by Daniel Sherrill for Sleaze Roxx, May 2013