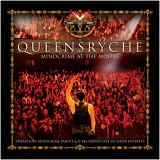 Review:
Revolution, sex, lies, controversy, tortured love, drugs, murder…what more could one have wanted in Queensryche‘s 1988 concept album Operation: Mindcrime? The innovative offering begged for a sequel, and in 2006 the band fulfilled the dream of legions of fans with the release of Operation: Mindcrime II, clarifying the plot line and laying to rest many questions.

Mindcrime At The Moore is the complete 32-song social commentary featuring Nikki, Mary and Dr. X. It is performed live at the Moore Theater in the band’s hometown of Seattle and is available on both CD and DVD. Not simply a retelling of the story, the show involves the album’s characters and props, supplemental dialogue and vignettes that enhance even the audio format.

From start to finish, the band members provide the high-quality musicianship that has been a staple of their polished and progressive efforts since the beginning. Geoff Tate‘s voice is in top form and he does more than just sing the songs. At times he “becomes” the protagonist, Nikki, and like any good actor, lets us feel that character’s anguish through an intensely emotional delivery.

Guitarists Michael Wilton and Mike Stone offer pristine fretwork throughout the discs. Although Chris DeGarmo played on the original Mindcrime, Stone has a firm grasp on the older songs and pairs well with Wilton, producing a crisp and unified sound. And of course, Queensryche wouldn’t be Queensryche without their trademark solid rhythm section, made up of bassist Eddie Jackson and drummer Scott Rockenfield, holding it all together.

While most of the songs are similar to the studio versions, there are pleasant surprises with a chilling rendition of “The Mission”, an extended “Electric Requiem” and a mesmerizing and ethereal “Circles”. A partial disappointment lies in “The Chase”, which features guest vocals by Ronnie James Dio, as Dr. X. The studio version is the ultimate in vocal battles between two of the story’s core characters, not to mention two incredible singers. Unfortunately, Dio did not perform at the Seattle show. Although Tate does a fine job singing with a recording, it would have been a real treat to hear the climactic exchange with Dio himself. It seems the band wanted to honor their hometown crowd rather than record the Los Angeles concert, which was Dio‘s only public appearance.

After the curtain closes on the Mindcrime performance the band returns with an impressive encore of “Walk In The Shadows” and “Jet City Woman”.

The devout Queensryche follower will be the true champion of this double-disc set. However, this unique future classic should be in the collection of anyone who has a taste for subversive subject matter and articulate rock n’ roll.