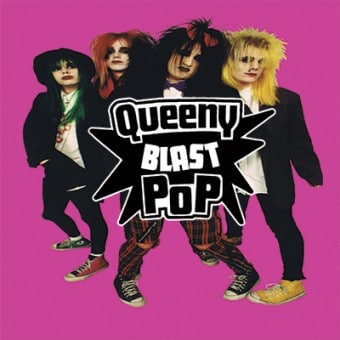 Review:
‘For make-up tips, write Queeny Blast Pop at…’ As a 20 year old full-on glam rock kid in Missouri, I should have known immediately just how special this was. In 1993 I was a college sophomore and a serious glam fan. One of my roommates was a huge metal head and he was sitting in the next room one day reading RIP Magazine and he yelled in to me, “Hey Stone, this magazine has one of your glam fag bands in it if you want to see it.” I knew this guy well enough to know that if he said that, it probably meant something good. And with that, it started…

I got one demo, then a dub of the second unreleased demo, then the color photos, the calls from their manager Gerry Gittelson, and bam — less than one year later I was in Hollywood hanging out with Queeny Blast Pop. I was just in town on a break from college, so the Sunset Strip was temporary for me, but Queeny Blast Pop was permanent. This band, once hailed by the Los Angeles Times as ‘the last of the true glamsters’ got to me on a cellular level. The catchy songs, the colorful image, the candy-coated bubblegum choruses, adolescent angst, and mostly the ‘We are full-on glam… deal with it’ mentality of the band’s lyrics were infectious. These guys were legit — great guys, great songs, and great attitude. Sort of like the Glamour Punks, but with a lot more bubblegum and a lot less bruises.

During my brief time in Hollywood I got to see Queeny Blast Pop play several times. From Pepper Sweet‘s stand up three piece drum kit to Punky Jean‘s whiny bubblegum vocals, everything about this band was great. That being said, the brains behind the group was Lesli Sanders, the ultra-talented songwriting genius behind the brilliant songs. Though this band flared out eventually and morphed into several different versions of itself, the magic of Sanders was always there.

This new CD from FNA Records has almost everything the band ever recorded. It has both of the three song demos they recorded in the early ’90s as Queeny Blast Pop and it even goes on to have 14 songs recorded with a new singer and after the band changed their name to The Distractions. Bear in mind that while the band wore less makeup during this stretch, the songs were the same. Some of the very best songs this band did were during The Distractions years, including the brilliant “Face In The Crowd” — an amazing song that still blows me away all these years later. This album ends with the final recordings of the band — when Sanders resurrected Queeny Blast Pop in the late ’90s they recorded a three song cassette with Sanders on vocals. It was during this time that I saw Queeny Blast Pop live for the last time. I saw them at the Continental in New York City’s East Village. Sanders gave me a tape of those three songs at that show, and while it took awhile for them to grow on me, they did eventually do that. They aren’t bubblegum glam/punk, they are sort of ’90s alternative pop — but very good.

Queeny Blast Pop didn’t last long after that show. Sanders went on to form City Girls Boys before eventually joining Pretty Boy Floyd, where he was the chief songwriter on the Size Really Does Matter album (which actually includes some recordings of old Queeny Blast Pop songs). Today he fronts a Seattle-based band called Prophets Of Addiction that is super, and right up your alley if you are fan of a hybrid Dogs D’Amour meets Hanoi Rocks project.

Overall, if you were a fan of what was happening in the world of glam on the Sunset Strip in the early ’90s this is for you. It was a colorful time, when candy-coated glam bands like Queeny Blast Pop, Heart Throb Mob, Krayola Kids and The Zeros were sporting rainbow colored hair, stretch jeans, and huge fun choruses. If you loved that era, this is as good as it gets!