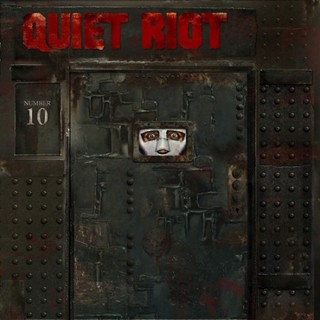 Review:
This is going to be a polarizing release. On one side you’ll have fans who feel Quiet Riot should have been laid to rest with singer Kevin DuBrow, and on the other hand will be listeners who are willing to give the legendary band a second lease on life. When DuBrow passed away in late 2007, longtime drummer Frankie Banali continued to keep the Quiet Riot moniker afloat with what would become a revolving door of frontmen — before landing Love/Hate‘s Jizzy Pearl.

Pearl performed an admirable job with L.A. Guns in the late ’90s, so there is no reason he couldn’t do the same for Quiet Riot — and for the most part he does. One would never mistake Pearl for DuBrow, because both have such unique vocal styles, but I was surprised how much the newcomer did sound like the original frontman at times. “Rock In Peace” for instance starts off with the trademark heavy Quiet Riot beat and a scream that conjures up memories of DuBrow — and in a fitting tribute, lyrics from “Metal Health” are referenced in the opening cut’s chorus. It takes awhile for the Pearl sung portion of the album to heat up, but by the time Quiet Riot get around to “Backside Of Water” they’re pounding out energetic hard rock. The album then gains momentum with the disc’s best track “Back On You”, a hard-hitting number that proves Banali and company still have a few tricks up their sleeves. Despite Alex Grossi‘s crunchy riffs, “Band Down” finds the band floundering before Pearl does his best DuBrow imitation during “Dogbone Alley”.

The final four songs on 10 consist of some of DuBrow‘s final live performances. None of the band’s biggest hits are present, which will once again have people talking. Personally, hearing “Put Up Or Shut Up” from Quiet Riot III was a welcome addition — and I can’t even complain about the inclusion of two tracks from Rehab — but something like “Thunderbird” would have been fitting. The biggest problem with the live tracks, and for the entire album in general, is the poor sound quality. The whole affair has very bass heavy mix, which gives the album a live feel but also makes it a difficult listen at times.

The straight-forward ’80s sounding 10 doesn’t tarnish the Quiet Riot legacy in any way, but it’s also a far cry from Metal Health — what its really missing is a huge anthem. The haters are going to hate and the fanboys will wet themselves, but the rest of us will more than likely be indifferent. Calling this Quiet Riot may be stretching the boundaries of even the casual listener, but there is enough contained within 10 to pique my interest for any future recordings by this line-up.