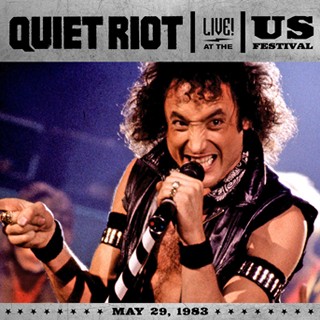 Review:
Many heavy metal fans have seen glimpses or heard about the now historic US Festival in 1983, when many of the greatest heavy metal bands (some in their infancy) shared the same stage on one day dubbed “Heavy Metal Day” in California. An estimated 375,000 people attended the show to see the likes of Motley Crue, Judas Priest, Scorpions, Van Halen and… Quiet Riot. Love them or hate them — Quiet Riot left a big mark on the metal scene. Their third album, which was also their American debut album, Metal Health, reached #1 on the Billboard charts and ended up going six times platinum.

Quiet Riot‘s Live At The US Festival 1983 is a real treat, showcasing some of the band’s best songs. Opening with the track “Danger Zone” (which never made it onto the Metal Health album until added as a bonus track when it was re-released), the band then only played songs from their original Metal Health release including “Run For Cover”, “Love’s A Bitch” and “Let’s Get Crazy”. While some may wonder why Quiet Riot‘s “Cum On Feel The Noize” was played in the middle of their set, that song had yet to be released as a single when the band played the US Festival on May 29, 1983.

The real gem of Live At The US Festival 1983 is the inclusion of the DVD which shows the band playing during the day to a massive crowd. Obviously, you need to get past the terrible outfits that include lead vocalist Kevin DuBrow‘s mostly red outfit complete with suspenders — his terrible hair is another obstacle. However, the DVD confirms that the band had a good live presence — mainly due to Kevin DuBrow.