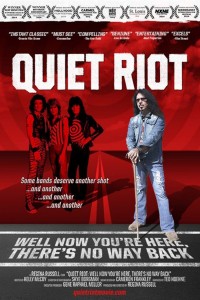 Review:
Well Now You’re Here, There’s No Way Back is an appropriately ominous title for this documentary film and a line from the song “Metal Health” by Quiet Riot, the very first heavy metal band to ever have a number one hit on the U.S. music charts. The six time platinum album Metal Health propelled by the hit single “Cum On Feel The Noize” brought the band to the forefront of the music scene and opened the door for most of the so-called hair metal bands of the 1980s to sign record deals and bring “heavy metal” music to the masses.

Quiet Riot certainly deserve a place in music history. This film not only gives you the back story and history of the band, but also shows you what it’s like to be on top and the not-so glamorous side of being in a rock n’ roll band. Though this film was brought to life by drummer Frankie Banali, it also takes time to explain that the band existed before his tenure and helped kick off the career of the great Randy Rhoads who would later go on to create some of the most memorable music of Ozzy Osbourne‘s solo career. But the really interesting part of this film is about the friendship between the charismatic frontman, Kevin DuBrow and Frankie Banali over the years and Banali‘s struggles after DuBrow‘s untimely death in 2007. This film is both heartbreaking and encouraging. I’ve seen other rock documentaries try to handle emotional situations and it often comes across as very contrived and staged. When I watch this film, I really feel that Banali is genuinely torn between preserving the legacy of the band that he and DuBrow made famous and continuing on with the Quiet Riot name to support his family and doing what he loves to do. I get the sense that he really loves playing these songs and just wants to play a live audience, doing what he knows how to do best.

I mean, let’s face it, Frankie Banali is one of the most respected rock drummers out there and I’m sure he could make a comfortable living doing session recordings for a multitude of other bands. The film also has some very humorous moments, mostly involving bassist Chuck Wright‘s struggle with being recognized as an important part of the Metal Health album and constant equipment issues while on tour. At the end of the day, this film really helps you to see that rock stars are people with some of the same day to day problems that many of us face. In a ten year period, Banali‘s mother, his wife and his best friend all pass away. He’s left to raise his daughter as a single parent and seemingly single-handedly resurrect the band Quiet Riot like a Phoenix from the ashes and keep his dreams and income alive. The director, Regina Russell, does a great job with making this film feel personal and it moves along at a steady pace.

I highly recommend this movie to music fans and rock historians alike. It’s rare to find a film like this that’s not only enjoyable and interesting to watch, but also make you want to watch it over again.