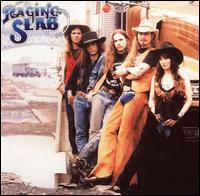 Review:
Raging Slab‘s self titled disc was an incredible example of guitar driven hard rock with southern overtones. The single “Don’t Dog Me” kicks off the disc in excellent fashion, displaying Elysa Steinman‘s mastery of the bottleneck guitar and Greg Strzempka‘s southern drawl. Other standout tracks include “Joy Ride”, “Get Off My Jollies”, “Bent For Silver” and “Shiny Mama” which includes what could be one of the shortest yet awe-inspiring solos in all of hard rock!

The re-issued version of Raging Slab includes two live bonus tracks in “Don’t Dog Me” and “Workin’ For RCA (a take on Lynyrd Skynyrd‘s “Workin’ For MCA”). There really isn’t a bad song on this disc, and the triple-guitar attack really set the band apart from their counterparts. Sadly, New York’s Raging Slab has floundered in relative obscurity, but that doesn’t prevent his album from getting two big thumbs up!