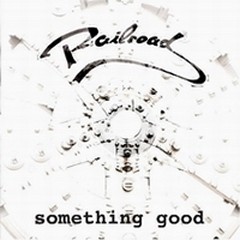 Review:
Way back in 1965 Bob Dylan was booed at the Newport Folk Festival for going electric — can you imagine what the folkies would have done if he started strumming in AC/DC fashion? That is something I’ve never thought about before, and why would I? The idea of such a combination is both off-the-wall, strange and frankly kinda fucked up. That was until I heard Railroad‘s latest release Something Good — an album that not only raises those questions but also answers them.

Arne Dieckmann, the brains behind this German band who have been slugging it out since the early ’90s, definitely has a knack for writing simplistic riff oriented rockers — or as Railroad refer to it ‘hardrock ‘n’ boogie’. The opening track, “Bottle Of Beer”, for example chugs along like something off The Four Horsemen‘s classic debut album before “Got No Way Out” conjures up images of AC/DC‘s mellower numbers. Railroad are at their best though when they take a heavier approach like they do on “Ready To Rock (2 Blokes)”, “Under Construction”, “Let’s Talk About” and the best of the bunch “I Can’t Handle You”.

Of course I have to keep mentioning the vocals when reviewing this CD — some people are going to like them and even more are going to think they are horrible, there won’t be any middle ground. The closest comparison I can make, besides the nasal delivery of Bob Dylan, is to an AC/DC clone band called Adrenaline Factor — and like that band Railroad have very unique vocals that won’t appeal to the masses.

Musically I’m enjoying Something Good, but for anyone thinking of purchasing this CD I strongly urge you to check out some samples first. I’m still not sure what to think, as I keep picturing Bon Scott being reincarnated and performing in a smoke-filled bar with Alvin and the Chipmunks.