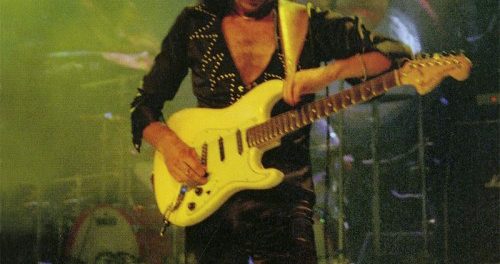 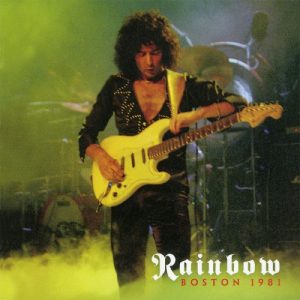 Review:
A few weeks back, I read that a new/old Rainbow live album would be surfacing and as per protocol around these parts, my curiosity level peaked! ITunes had it so I purchased it! Anyone surprised by that?

Turner had to followed Ronnie James Dio (R.I.P.) and Graham Bonnet in Rainbow and he got hammered by the press for making Rainbow sound like a British foreigner. Perhaps this was the case, but for my personal listening taste, this is my favourite version of the band as this was the Rainbow I had gotten into.

The mix on this album is real good considering it’s 35 years old. Despite being bootlegged numerous times, it has a good sound! On the headphones, it’s all Blackmore‘s guitar on the left side! Everything else (vocals, bass, drums and keys) is in the middle on the right! You really get blasted by Blackmore‘s guitar and why not? He’s a genius!

“Spotlight Kid” is a great opener and Turner tosses down a real cool smooth as silk rock vocal! Almost a little raspy (road worn?), still it gives you that live feeling like you’re there! Blackmore is on fire and it’s the opener and the “Man In Black” doesn’t fool around! I love the interplay between Blackmore and Don Airey on the keys! Very Deep Purple like. Rainbow rock it out the gate in a quick and orderly fashion!

“Love’s No Friend” starts off with Blackmore playing a chill riff while Bobby Rondinelli plays his bass drum to keep the beat and full points are awarded here as he smashes the tar out of his gong (a lost live art!) “Love’s No Friend” is an interesting second track as it ploughs forward kinda slowly but by the end, Blackmore and the boys ramp it up and it picks up steam as the SS Rainbow heads towards the Rock Dock. Yeah, that was kinda a lame scenario. It’s all I got!

Airey begins “I Surrender” with a throwback keyboard sound and Blackmore joins in. This is awesome stuff as the latter plays loose with a real live feel and with him being totally mixed on the left side, when he stops for a second, there’s no sound coming out! Ha! So cool! It gives it a real cool live feel! This song is very catchy and has a pop rock element to it and Turner sings a great track! Actually this whole album, Turner‘s voice is real good!

Want to hear a real cool opening riff? Click on the video posted below of “Man On A Silver Mountain.” Even though Dio sang the original, Turner sings it well and with respect! This is a wicked awesome track and Rainbow rock this bad boy… Crank it!

“Catch The Rainbow” is a 14 minute trippy prog rockers’ delight! Its like you’re on a sonic rainbow with all of its time changes, albeit slow trance like! This must have been a toker’s dream at the Rainbow shows of yesteryear! I could picture it now with everyone just getting baked out of their minds and drifting elsewhere in a trance like state! Blackmore approved!

Rainbow rock it to the top with “Can’t Happen Here.” Love the start of this tune as the drums/bass/keys start it and it sounds like Blackmore‘s having technical issues and that’s what I love about actual live albums. Warts and all! Turner and crew are locked and loaded on this tune and it’s another great straight ahead rock track!

Airey plays a real crazy keyboard almost spooky like (think the vibe of Ozzy’s “Mr Crowley”) for “Lost In Hollywood” (I’m sure there are many a Rainbow tale of lost nights everywhere). The song is another rocker in the Rainbow arsenal! For good measure, toss in a Blackmore guitar solo and from what I listened too, it sounds like his strat took a shit kickin’ that night…

Probably since I work in a hospital, I always dug the Difficult To Cure album cover (picture of the band in hospital operating room gear). “Difficult To Cure” is a big epic like Beethoven inspired track. Blackmore and Airey weave in and out of each other’s music space and it’s like Blackmore uses the keys as a second guitar — dual lead solos with the keyboards and such. Man, say what you want about the after show party shenanigans that I’m sure all bands partook in. With Blackmore, you had to have your chops together or he would fire your ass!

“Long Live Rock N Roll” is another straight ahead rocker track from the Dio years and Rainbow lay down the law with this song.

Blackmore digs into his previous band’s catalogue but teases the crowd with he beginning of “Lazy”? Ummm nope! Hey, there’s the beginning of “Woman From Tokyo!” Wawazat! So Blackmore messes with the crowd and then launches into the opening riff and it’s “Smoke On The Water.” I can see why when Blackmore and Glover were back with Purple, they chose Turner to sing for them (1990’s Slaves And Masters). Turner sings “Smoke On The Water” real good and Rainbow pull it off — but like there would be any doubt right?

This is a real good album! Rainbow‘s Boston 1981 is one heck of a live album! No fixings and doctering it up in the studio. From what I read, this show was a co-headline show with Pat Travers and recorded for the King Biscuit Radio Show. Get this…

Reviewed by Deke from Superdekes for Sleaze Roxx, May 2016

RAINBOW – Man on the silver mountain (Live in Boston 1981)