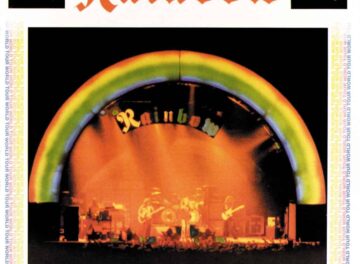 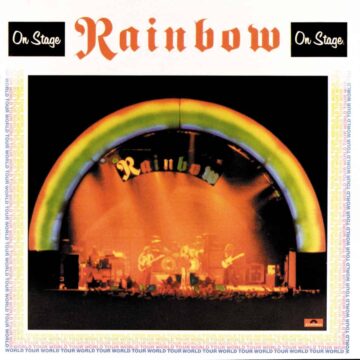 Review:
“Toto: I have a feeling we’re not in Kansas anymore. We must be over the rainbow!”

And with that now famous quote courtesy of Dorothy from film classic The Wizard of Oz, the first live recorded offering from hard rock band Rainbow was off and running. Nevermind that this double slab of vinyl fell like a dirty apple off the tree of guitarist Ritchie Blackmore‘s previous band Deep Purple who themselves offered up their share of live releases showcasing appearances in Japan and Europe (primarily Germany). On Stage includes live tracks from both Germany and Japan sequenced in a way as to appear as how a Rainbow concert at the time might be despite not featuring 1976 regular tour track “Stargazer” and tour encore “Do You Close Your Eyes.”

Tracked in late 1976 on the Rising World Tour, On Stage features the stellar Rising album line-up of Blackmore along with vocalist Ronnie James Dio, keyboardist Tony Carey, bassist Jimmy Bain, and drummer Cozy Powell that would rock the world until 1977 come the exits of Carey and Bain. While not complete compared to actual setlists for the 1976 tour, On Stage still is an incredible live release from a razor sharp band at its most lethal tearing through mostly early Rainbow classics penned by Blackmore and Dio. Matter of fact, the only non-Rainbow tracks included are an over 13 minute side spanning cover of Deep Purple tune “Mistreated” and a closing take on The Yardbirds‘ “Still I’m Sad” which the band covered on 1975 debut Ritchie Blackmore’s Rainbow.

With the omissions of “Stargazer” and “Do You Close Your Eyes” from On Stage, this capture of the Rising tour actually features only “Starstruck” from that respective record albeit it within a medley featuring Dio-era Rainbow classic “Man On The Silver Mountain.” Outside of opening track “Kill The King” which would not make its studio recorded debut until the following year’s Long Live Rock ‘n’ Roll release, On Stage is mostly made up of songs from the group’s 1975 debut leaving very little to represent that tour’s band line-up with Blackmore and Dio the only Rainbow members to appear on both of the band’s first two records.

While capturing moments from a tour supporting the band’s second release but featuring next to nothing from Rising, this first of several live albums from Rainbow is still a great listen during a time when live releases weren’t always actually live, but more of a nearly live document of a great band. While it’s fact that the tracks were spliced together from several different concerts, each one has been said to be as live and real as can be. It still is an incredible record but for those purists more interested in better representation of shows from that late 1976 Rainbow tour, seek out 1991 album Live in Germany 1976 featuring fully unedited tracks and the above mentioned songs “Stargazer” and “Do You Close Your Eyes.” Either one though offers great audio of this too short-lived band line-up from the Rainbow‘s first (and arguably) best era.