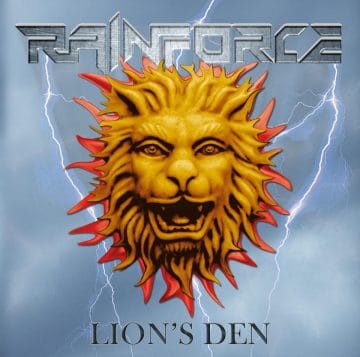 Review:
The most difficult albums to review are always the middle of the road ones, the ones that aren’t bad but don’t really stand out above the rest of the pack either. Rainforce‘s Lion’s Den album is one of those records.

I didn’t realize this when I first discovered Rainforce but the group appears to be a Christian based rock band. I suppose the title “New Jerusalem” was a big hint. The Bible verses inside the CD case confirm it and there’s really nothing wrong with that. It’s just that I’m surprised that Rainforce do not advertise themselves as Christian rockers on their Facebook “about” page (aside from some of their band influences) but the lyrical content and inside the CD appears focused completely towards God. Perhaps Rainforce were hoping to have people judge them solely on their music without the Christian tag on top of it.

In any case, Rainforce‘s music is kind of old school metal (in terms of the pace and letting the songs breathe) meets some modern or sometimes odd sounds in some ways. Everything kind of rides on lead vocalist Jordan Cutajar‘s singing given that his vocal range appears somewhat limited and the songs appear tailored to fit his vocal range.

There are quite a few guest appearances on Lion’s Den and the band has apparently gone to great lengths to advertise its guest performers. Funny enough, I’ve never heard of any of them but then again, I admit not being that knowledgeable about Christian rock groups aside from Stryper and Petra. I do note that Whitecross guitarist Rex Carroll (on “I Am Yours”) and Barren Cross bassist Jim LaVerde (on “Desert Sand”) are two of the guest performers. It’s hard to gage the impact of the guest performers given that there is at least one per song — except for “Feed Me (I’m Hungry)” — and sometimes the guest musicians’ contributions are rather minimal such as Philipp Rölli who on two tracks only provides backing vocals or Philippe “The Greis” Kreis who provides growls (really?) and backing vocals on “The Gods Have Failed.” Given the minimal contribution of some of the guest performers, I would have preferred the band to only highlight guest contributions that significantly added to the songs such as someone contributing lead vocals.

My favorite tracks on Lion’s Den are the more melodic “He Came To Set The Captives Free” which is the only track to boast keyboards (I am still surprised at myself for choosing a song with keyboards as the stand out track) and the riff oriented “I Am Yours” with the solos from guest performer Carroll. As I stated at the beginning of this review, Lion’s Den is not a bad album but it doesn’t stand out above the rest like an Eclipse, Steel Panther or The Wild! album. I think more emphasis on melodies, particularly for the chorus portions (listen for example to the dreadful chorus portion for “My Rock”) of the tracks, would go a long way to make Rainforce‘s songs way better overall.