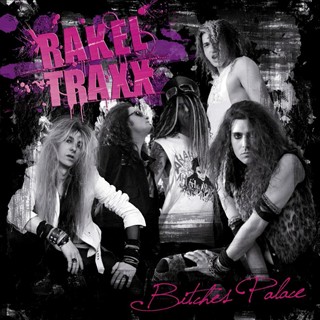 Review:
Jumping across the channel from Marseilles like an electrical current burning with infectious energy, the French band Rakel Traxx brings you their debut album Bitches Palace. Unfortunately all electricity needs potential energy to drive it along and I’m just not sure this band’s got the potential.

“Yeah!!!” opens the album with the drive that every song on this CD contains, and once you’ve got used to the nasal vocals of Shanon Dollz (similar to Swan from BlackRain but without the advantage of his range), and paid the simple chord progressions that they deserve, you can sit back. But where does it go? The answer… not far.

“Fuck You!!!” shows the first signs of structural creativity, if limited, while “Let Me Take Your Gun” is a better composition but my appreciation waned because it was just too long. “Try Again” was an interesting take on a ballad, seeming to run in the same vein as the rest of the album, only slower — it made the guitars sound restrained, as if they couldn’t wait to get going again, and not in a good way either. “Bang Bang” was a solid choice for the closing track because it was more memorable than the others, but again, too long.

The tracks in and around the ones I’ve mentioned seemed to merge into each other with repetitive choruses and riffs — it’s almost as if these boys are rushing headlong into each track. Bitches Palace contains an impetuosity I would usually love, but the result here is songs that are too similar and that don’t sound well enough thought out. I think Rakel Traxx is pushing at something here and I reckon they could deliver a hell of a live show — the recording and writing side just needs refining, and I look forward to hearing it.