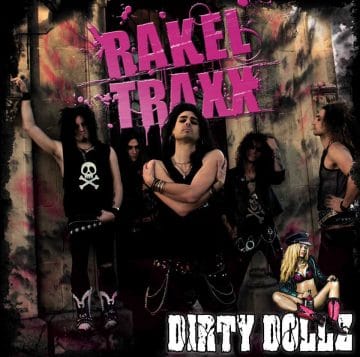 Review:
If I had to select one album in 2016 that embodies all that is sleaze rock, Rakel Traxx‘s Dirty Dollz may well be that pick. I am not sure what is in the water in France but it seems to be producing some very fine sleazy type rock n’ roll. Rakel Traxx simply deliver an album that will quickly take you back to the late ’80s / early ’90s with their album Dirty Dollz. Every track is a sleazy rocking one except surprisingly for the last track “Drugs To Kill Your Mind” which closes the very good album on a bit of a whimper with a ballad.

Some of the tracks on Dirty Dollz must have been lingering for a while because I note that the video for the engaging song “I Need You Honey” dates back more than three years ago. Nevertheless, good things are apparently worth waiting for. I really don’t have anything negative to say about Rakel Traxx‘s Dirty Dollz album aside that the closing track is a bit disappointing one and could have been left off the album. It’s not a bad song but does not measure up to the rest of the songs on Dirty Dollz. Every other track on the album provides good melodies, a fast pace, a bit of a punk edge and some sleazy feeling vocals from singer Shanon Dollz. You should note that Dirty Dollz did receive some consideration for the Sleaze Roxx’s Top Ten Albums of 2016. It’s not a matter that it wasn’t good enough to make it but rather that there were just so many good albums to choose from.

Odds are that if you like one of the first nine songs on Rakel Traxx‘s Dirty Dollz, you will like all nine of those tracks. They are similar yet not so similar if that makes any sense. My favorites are “Red N’ Hot” (which has a video as well), “Lady Got A Gun” which exudes tons of attitude, “Hey!!! Hey!!!” which is probably the closest to an anthem on this album with its catchy and simple chorus (“Hey! Hey”), and “I Need You Honey” which also has a video and is an upbeat rocker. One knock on Dirty Dollz is that there does not seem to be that one song that stands out above the rest — that hit single that might “make” the band. At the end of the day, that is not really necessary. Rakel Traxx‘s Dirty Dollz is a very good album that will satisfy any lover of sleaze type rock n’ roll.