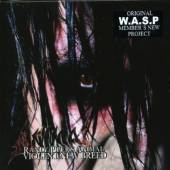 Review:
Randy Piper (the original W.A.S.P. guitarist) is back behind the heavy metal guitar and in the limelight again with a very strong new album from his long time band Animal. Though the history of Animal can be traced back to the late 80’s, this is only the band’s second album and it is by far their strongest release yet. That might be attributed to the new producer and guitarist, Mr. Chris Laney of Zan Clan.

After Animal‘s 2003 album came out titled 900Lb Steam on Perris Records, Chris Laney contacted Randy Piper saying he liked the songs but the production sucked. Randy agreed as this was not news to him and low and behold, Chris Laney became an Animal too! For those who know Laney‘s work, production is his specialty. And, that shines through with this album titled “Violent New Breed.”

The CD kicks off with the title track of “Violent New Breed” and it sets the pace for the album quite well. Rick Lewis, the vocalist, really bellows out the lyrics. Track two, titled “Morning After,” is another solid song. This is about the only track where the unfair and closed minded comparison between Lewis and Blackie Lawless is justified, as Lewis sounds slightly like Lawless in the opening verse. “Hey You” is a track that has it all. It has a very modern sounding intro which flows perfectly into excellent guitar work by Laney and Piper. Lewis‘ voice sounds great on this very melodic rocker. This one could easily be a single heard on the radio.

The fourth song is called “Eye of The Storm” and this is how heavy metal should sound. This could be a Judas Priest song. Awesome song with awesome guitar work and great vocals, and a hard driving beat too. It sounds like heavy metal to me! Next up is a song called “Turn And Walk Away.” I turned when this song came on to hear this one better as it is very different from the first four songs, diversity is a good thing. This is a very strong ballad with fantastic lyrics and a killer solo. I only wish it were about 20 seconds longer, but it has a great feel to it. “Animal In Me” has good lyrics but it doesn’t really hit the spot as well as the first five tracks do.

Track seven is called “Hell Child” and holy cow does this one kick my ass, with sprinkled in effects that make it sound like a horror movie. Great lyrics, great guitar hooks, and awesome screaming vocals… This song embodies Violent New Breed. “Salt” has so much going for it, it is incredible. From all the melodic rock elements of “Hey You” to the screaming of “Hell Child” and the guitar work that never lets you down at any point on the record, this one is incredible. The chorus is so melodic it reminds you of Def Leppard while the vocals on the verses are so rocking it sounds like a modern band that doesn’t suck. This one has it all.

“In The Mirror” is up next and the diversity of the album continues. This one has a very melodic feel almost like a ballad, but it is hardly an “I love you” ballad. Hell, “scars on my wrists” are hardly “Every Rose Has Its Thorn”, so back off the flack on this song. Great guitar work, great chorus, awesome hooks. It’s another song that could easily be played on the radio. The final track, titled “B.O.O.M.”, is loud, abrasive and pounding. In other words, it’s perfect! There is an effect on Lewis‘ vocals that I call “Space Man Vocals.” I’m not a fan of that effect but it somewhat fits the point of this song. It’s a solid and strong way to end the album.

Overall, I enjoyed Violent New Breed. You crank this one up and you scream along and you’ll find yourself remembering what a little heavy metal is supposed to be all about. That said, please allow me to right a few wrongs with the reviews of this album posted previously.

First, this album being called the album that should have been W.A.S.P.‘s 3rd is just plain wrong. With all due respect to the Inside The Electric Circus album, this album does not feel like a mid ’80’s album. That’s not to say this CD is far removed from W.A.S.P. either, though. True and good heavy metal is in a league of its own and both W.A.S.P. and Animal are in that same league in my opinion. But don’t buy this album thinking it is going to be one thing and dislike it just because it isn’t. It’s got all the elements of metal of the ’80’s with a little heavier sound and modern elements. In other words, it’s heavy metal and it has screaming vocals but it really is not a W.A.S.P. album. If you want a W.A.S.P. album, buy one. This is a great album too, just know what you’re getting and don’t take the small-minded stereotyping to heart.

That said, buy it, it’s great. And demand your radio stations play a song off of it. I’m tired of this boring rock they play by new bands who don’t even know what enthusiasm means.