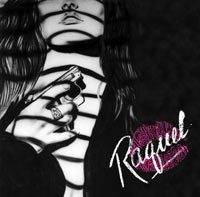 Review:
Raquel was a band on the Sunset Strip in the early 90’s. They had a song that was in an MTV commercial called “Pop Goes The Music.” But because of the grunge explosion in the early 90’s Raquel was never given a chance until when this album was released on Metal Mayhem Records – not quite the big break of getting signed to a major label, though. Read on…

1) “Pop Goes The Music” was the song that was featured in a commercial for MTV (and in the introduction to Nirvana‘s “About a Girl” video). If you listen to the lyrics, this song is perfect for that, with lyrics like “Well I hear people say that we look too good to play real rock and roll, well I guess it don’t bother the girls too much sittin’ in the front row.” It’s a mid-tempo rocker with a lot of energy. You don’t need a fast tempo to have energy. This is the type of song that should have been a hit on MTV.
Score: 10/10

2) “Love Don’t Go” is a semi-fast rocker, along the lines of White Lion, Big House, and Attraction. Fans of 80’s metal should be nuts over this. This is the type of song to blast at a party.
Score: 9/10

3) “Dark City” is a mid-tempo rocker, which should please anyone who wants straight ahead melodic hard rock. The vocal harmonies sound very good on this song. The drumming is very prominent in this song, which is a damn good thing, because the drumming kicks ass here.
Score: 8/10

4) “Everywhere I Go” starts out acoustic then the distortion gets this going, there is still acoustic guitar playing the background of the verses. This would fall under the category as the best song on this album. The song is very well written and the musicianship is extremely solid. This song is available as an MP3 download at www.metalmayhemmusic.com. Everybody is perfectly tuned in with one another here, the drumming, guitar playing, bass, and vocals all make this song come alive.
Score: 10/10

5) “Angel” is very much along the lines of White Lion and Firehouse, the guitar playing is what really shines here, making this another good one for Raquel. It doesn’t quite do for me what the last song did, but that was the best one here, so what would?
Score: 8/10

6) “Darlin'” is a good time rocker, Raquel doing what they do best. This is a guitar driven rocker with some awesome lead guitar playing in the beginning. Along the lines of Danger Danger, a song that definitely lifts you up.
Score: 9/10

7) “Kiss Her Goodbye” has heavier, not quite as noticeable guitar. The song is not as good as anything else on this album. It’s actually a loser as far as this album goes. Raquel at their worst, and it’s still a decent tune.
Score: 8/10

9) “J.G.W.” starts out with some cool bass playing and a guitar riff that gives birth to this great album closer. What “J.G.W.” stands for, I’m not sure, but who cares? Raquel‘s self-titled debut is finished out nicely.
Score: 10/10

Raquel‘s long-lost debut is actually quite entertaining. This album was produced by Tony Wright, who went on to multi-million sales producing albums for grunge bands such as Korn and Alice In Chains, but grunge Raquel is not. They are 80’s hair metal dudes with big hair, and fun for anyone who likes hair metal.

Essential for fans of: Attraction, White Lion and Big House.