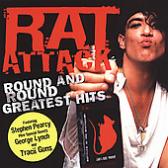 RAT ATTACK
ROUND AND ROUND GREATEST HITS
Released 2005 (Cleopatra)

Review:
Ratt released their last studio album with Stephen Pearcy in 1999. That record was very under-appreciated by the media despite being on par with all other Ratt releases but was well received among the Ratt fanatics like myself. Ever since then, we’ve hoped for a new Ratt release from the band as they continue to tour with a new lead singer but none is forthcoming. Perhaps I should’ve looked for the voice behind Ratt instead of looking at the band themselves.

Rat Attack, yes that is Rat with only one T as it is clear Stephen does not have the copyright to use the name Ratt, is a release combining some new creations with some classic cuts. Joining Stephen on this release are ex-Dokken guitarist “Mr. Scary” George Lynch and ex-L.A. Guns guitarist Tracii Guns. Stephen‘s “Rat Bastards” join him on several cuts as well.

Now, on to the music!

The album opens up with, as most cuts are, a new version of a classic song in “Round And Round”. It is clear that Stephen still has impressive pipes and does a really good job bringing new life into a classic cut. The same, however, cannot be said for my favorite Ratt song “You Think You’re Tough”. While the musicianship is good and the new production quality makes for a richer and heavier sound, Stephen doesn’t quite sing the chorus the same way he did on the original and it doesn’t have the same effect. Emphasis is not on certain words and that really robs the song of the original feel.

Those two songs are pretty much how the album goes… Some are real good, some leave you a little unsatisfied. For example, “Lack Of Communication” is, in my opinion, better on this record than the original Ratt recording while “You’re In Love” leaves something to be desired.

One song I heard live at a Stephen Pearcy concert was “U Got It.” I consider myself a big Ratt fan but I could not place the song to a record of theirs. So, hearing the song on this CD is tremendous. It is, however, good to know that my mistake of claiming this to be a Stephen Pearcy original and not a Ratt song was corrected as “U Got It” appeared on Ratt‘s first six song LP. I own the album but somehow forgot the song… shame on me. Regardless, this song kicks ass and really sounds better on this record than on the classic LP.

There are a few cool new cuts, the best of which is probably “Sweet Cheater”. It isn’t quite Ratt but it isn’t bad by any means. It keeps the music flowing and if you can stand up against some Ratt classics, it must be quality material.

After listening to the record once through, you get a pretty good feeling. You have just heard some of the best songs ever written with a new spin, and the production quality and sound of the songs is updated to sound brand new and not worn out. Stephen Pearcy proves he’s still got it and he can still hit the high notes when he chooses to… The only thing is he doesn’t reach for them as often as he used to which is understandable but not having the high pitched attempts during songs like “You’re In Love” take away from the song.

Here are a few questions and answers that might help your decision on if to purchase this record or not.

Does the album ruin the Ratt classics? No, not at all. It actually adds to them because you can hear how they are updated over time while staying true to rock ‘n’ roll.

Is this a nostalgia disc? Perhaps, perhaps not. I hate the idea of musicians who put effort into a release being labeled because of mainstream media coverage. While I love hair metal, I am a little uneasy actually calling it hair metal as it seems to hold some sort of negative connotation among the geeks in suits who usually write reviews for magazines. Plus, the bands are way more than hair. They’re talented musicians who were able to write about a variety of subjects and not just “life sucks and I want to die.” That said, the majority of the songs are classic Ratt songs done by the original singer of the material. So, take that for what you will.

If I have all the Ratt classics, do I need to hear this? It is entirely up to you. For me, curiosity killed the cat and I’m glad I picked it up because it is a rich record full of new interpretations on songs I love. And quite frankly, I love the song “U Got It” and have had it stuck in my head on and off since I saw Stephen in concert last August. So, it is not a must for Ratt fans but if you hunger for a new release from the band, this is probably about as close as you’ll get.

Stephen Pearcy runs a great site at www.stephen-pearcy.com selling live concert DVDs and informing the fans of his upcoming tour dates. Be sure and check his site out and pick up Rat Attack now!