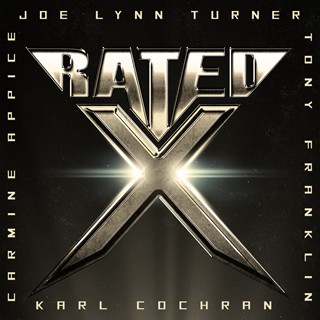 Review:
With a moniker such as Rated X one could be excused for picturing an over-the-top glam rock band — but in this case you’d be way off the mark. Instead this oddly named concoction is a super-group of sorts, one that came to life in the mind of the Frontiers Music president, featuring talented vocalist Joe Lynn Turner in front of the old Blue Murder rhythm section of Tony Franklin and Carmine Appice.

We all know super-groups are often more impressive on paper than they are on album, but the promise of a return to the grandiose Blue Murder sound piqued my interest. While there is a little of that approach on this self-titled debut (how can there not be with Franklin‘s signature bass lines), Rated X really is a completely different animal. At times majestic, but more often than not blues-drenched hard rock, Rated X is more impressive than your typical swiftly thrown together project — and really is nothing more than a collection of established musicians having some fun while playing ’70s drenched rock from the heart.

For me Rated X works best when they strip the pretentiousness often associated with musicians of their caliber and simply play straight-forward bluesy rock. Excellent examples of this style are the fiery keyboard laced “Get Back My Crown”, lead-off single “This Is Who I Am”, the tempo shifting “Fire And Ice”, the pounding “I Don’t Cry No More” and the hard-hitting “On The Way To Paradise” (although this track infuses a bit too much showboating for my tastes). Yet when Rated X venture deeper into traditional melodic rock they are pretty damn good as well, one of the best examples of this is “Maybe Tonight” — a song which simply begs the listener to join in during the chorus. For people aching for the Blue Murder sound I suggest checking out the seven minute epic “Lhasa”, a song that tends to overstay it’s welcome but does have that same bombastic approach.

While Rated X is a new band, they undoubtedly have an old-school sound performed by top-notch musicians. Taking equal elements of Deep Purple, Rainbow, Blue Murder and Joe Lynn Turner‘s solo career was probably playing it safe — but also exactly what fans were hoping for. While not without flaws, Rated X for the most part lives up to its super-group billing and is an entertaining stroll down memory lane.