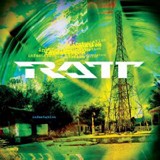 Review:
I was looking forward to Ratt‘s first studio album in over a decade, but after their average 1999 self-titled return, I wasn’t expecting too much. So it is with great pleasure to announce that not only has Infestation exceeded my expectations, it completely blew them out of the water! This may just be Ratt‘s best album since 1986’s Dancing Undercover as it captures the band’s signature sound perfectly and is heavier and dirtier than either Reach For The Sky or Detonator.

I’m not sure what has led to the re-energization of Ratt — maybe it is the addition of Quiet Riot‘s Carlos Cavazo sharing guitar duties with Warren DeMartini — but the ‘rodent rockers’ aren’t just phoning this one in. No way, this sounds like a band that is hungry once again… it is the perfect return to form. The opener “Eat Me Alive” harkens back to Invasion Of Your Privacy‘s “You’re In Love”, only played with even more aggression. This is exactly what I wanted to hear from new Ratt, although the type of song I never thought they’d be capable of writing again. The lead single “Best Of Me” sounds like Ratt attempting Van Halen circa 1984 while “A Little Too Much”, “Look Out Below”, “Lost Weekend”, “Garden Of Eden” and “Take A Big Bite” are great additions to the band’s classic catalogue.

The only time Infestation let me down was on the ballad “Take Me Home” and the final cut “Don’t Let Go”. It is a disappointing way to end an otherwise perfect CD, an album that rocks hard and displays a legendary band finding their footing once again. Singer Stephen Pearcy sounds great, then again he has always delivered in a studio setting, but it is the tandem of DeMartini and Cavazo that steal the show with riff after riff.

For me Infestation is the biggest surprise in a long time, because I honestly didn’t think Ratt had it in them to create music this good at this point in their career. This is a CD that really caught me off guard. All too often an ’80s band will say they are returning to their roots only to leave you scratching your head wondering what they are listening to. In this case, Ratt was right on the money… Infestation is the rebirth of the classic Ratt sound.