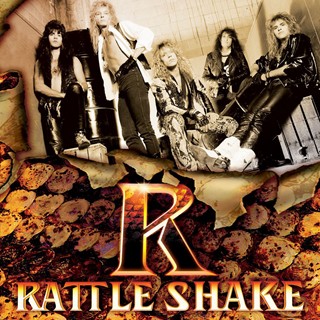 Review:
Eonian Records have unearthed some forgotten gems in their short history, but California’s Rattleshake may in fact be the ultimate in buried treasure. Rattlesnake have that over-the-top ‘screw you’ attitude about them that made band’s like Spread Eagle and Dangerous Toys legendary to fans who wanted more than just the glitz and glitter of ’80s hair metal bands.

With the opening screams of “Shootin’ Whiskey” you quickly realize that Rattleshake was a band who had the sleaze sound down pat. Vocalist Don McBee lets loose from the onset with one of those voices that must lead to permanent vocal cord damage later in life. Behind him the rest of the band play with the ferocity of hungry young musicians who have something to prove. “Gypsy Queen” follows with its Odin influence while “Take Me Down” comes complete with screams that would make Jason McMaster proud. “Mudbone Delight” has Rattleshake mixing up tempos and settling into a solid groove before the boys go out on a high note with the merciless “Rattleshake Boogie”.

Consisting of only seven songs may seem like not much bang for your buck, but in the case of Rattleshake it means no-filler (I personally could have done without the ballad though) as the band get straight to the point from the get-go and are practically relentless throughout this self-titled release. Completists usually want everything ever recorded by a by a group on these reissues, but that often leads to the inclusion of some songs that would have been better off remaining buried. You also have to like Rattleshake‘s attitude — while many bands from the early ’90s blame grunge for the death of their careers, Rattleshake openly admit the chances of them making it big were slim to begin with.