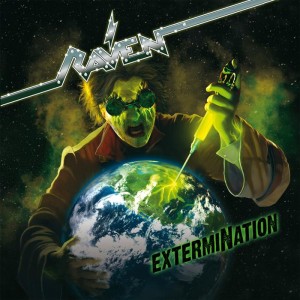 Review:
Wow! Just Wow! This was an incredible surprise. I picked this up on a whim while I was just browsing for something new to listen to. I wasn’t expecting much. In fact, I’d say that my expectations were extremely low for this CD. Frankly, I’ve always considered Raven to be just an okay or average band. Who would have thought, that over forty years after the band’s inception, they would release their best album ever, yes that’s right….I said ever.

If you’re a fan of straight ahead old school heavy metal you will love this album. This has to be a contender for comeback album of the year. ExtermiNation hits you like a punch in the face and never lets up. This line-up of the band has been together since 1987, so it’s not like there’s new blood in the band. Whatever happened, the stars and heavens aligned for Raven on this release. You almost get the feeling that something has been holding them back and they finally just cut loose and unleashed the demons. And, rightfully so. Raven‘s history reads like a real life Spinal Tap. In 2001, a concrete wall fell on guitarist Mark Gallagher, which crushed his legs. They went on hiatus until 2004, and even performed many dates on that tour with the injured guitarist playing in a wheelchair. Now if that’s not metal, I don’t know what is. This year, while on tour for ExtermiNation, they played their first shows in Colombia while enduring a 6.2 magnitude earthquake. They started a kickstarter campaign to fund this album and thankfully their many loyal fans came through. And maybe that’s the key to this album’s success. They sound like a hungry band that’s got something to prove. It’s the fire and intensity that you often get with a new band, which is incredible, since Raven started out in 1974.

Normally, I would do a track by track breakdown, but I prefer to rate this album as a whole. And, it also plays that way as well. I don’t really want to isolate specific tracks on here. It has a natural album flow that’s great from beginning to end. Do yourself a favour and check this one out. It’s one of the best pure metal albums that I’ve heard all year, hands down. This is currently in my top ten for the year and that’s saying a lot because, as I said before, I haven’t exactly been a big fan of this band, but Raven‘s ExtermiNation has grabbed me by the throat and made me take notice.

Taken from the new album “ExtermiNation”More Infos and Tourdates under: www.ravenlunatics.com