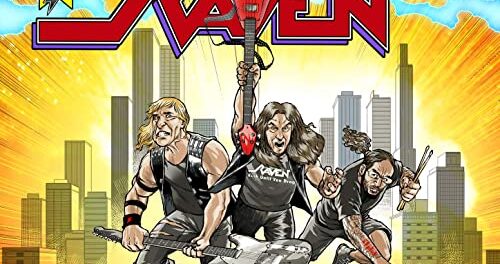 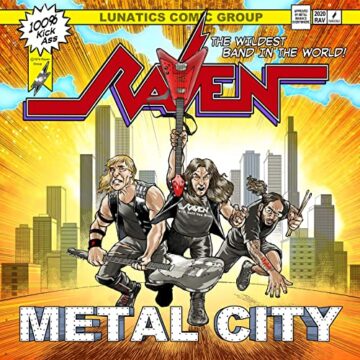 Review:
The Heavy Metal Gallagher brothers are back! John (vocals and bass), Mark (guitar) and rookie Mike Heller (drums) are turned into comic book characters on Metal City, the 14th studio album by one of the pioneers of the New Wave Of British Heavy Metal. On the front cover, signed by artist Alan Robinson, the trio call themselves “the wildest band in the world” – the “hottest” we all know who they are, right? –, and in the booklet, illustrated among others by the excellent Shawn McCauley, we see the three endowed with superpowers in situations such as fighting a Doctor Eggman-like scientist and flying in the outer space like the Fantastic Four minus one.

Musically, the formula remains unchanged, with the fastest guns blazing in a “get out of my way” style, totaling just over 38 minutes of breathlessness that live would be converted into an updated definition of the moshpit concept. The lyrics tell the tale of the road years added to the lessons obtained from the recording industry, to whom, among other villainous roles, they attribute the saboteur agent in “Top of The Mountain” and the cheater behind the data addicted to “Break.”

Lemmy Kilmister (1945-2015), the leader of Motörhead, is honored in the lyrics of “Motorheadin’”, a song that puts a knife to our neck while ordering “go faster!”. Veteran Michael Wagener handled the production and was able to maintain budget, schedule and, above all, identity. As much as the style is 100% British, the bulk of the material was recorded in a studio in Nashville, Tennessee — something unthinkable and inaccessible almost four decades ago. Take the furniture out of the room and get ready to rumble listening to Metal City at maximum volume.

Raven‘s “Not So Easy” video: