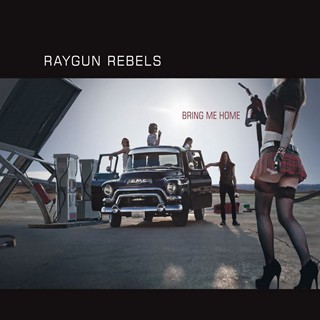 Review:
The Raygun Rebels cite their songs as being about the good things in life — the problem is that these joys of life have been covered before, and usually far better. The hard rock sound of their debut album Bring Me Home is relatively fresh, but the vocals and song structures are unexciting, repetitive and lack originality. The layers of sound aren’t well defined, a point more on production, but it does feel like you are listening to one long song that develops and changes a little every four minutes.

The tone of the ballad “Goodbye” is so matter-of-fact that it ruins the musicianship of the rest of the song. The instrumentals are almost like separate sections of the songs and I feel the record gives an overly amateur impression. The band doesn’t seem to have formed their own sound or personality just yet and this is all too evident on this album — I think finding this would give them a more solid base from which to work from, instead of just following their influences. Having the title track at the end of the album seemed a little odd to me — still, I suppose it’s an incentive to listen through the album, although when you see that it’s over seven minutes long you may decide it’s not worth it. Well, “Bring Me Home” is one of the stronger tracks here, but I think you’ll understand when I say that it’s not worthy of seven minutes of track time.

These young Germans do have their moments, with some ’70s rock inspired moments (especially in the guitar work), but the sub-standard production and lack of variety really let them down. At times Bring Me Home has a DIY punk attitude about it, but I’d like to hear what the Raygun Rebels can come up with when they clean up their sound a little more.