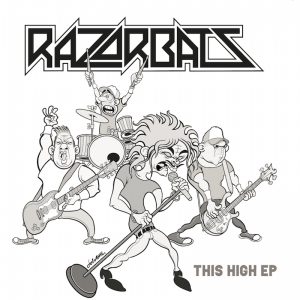 Review by Metal Mike:
Razorbats made their debut in 2014 when they released the EP Bring It On through American record label Self Destructo Records. The track “Born In Blood” got a lot of radio airplay in their native Norway and the release was well received by the press. The band followed up with their first full length album titled Camp Rock in 2015 and lead single “Kids of the 70s” got picked up by rock radio throughout Europe and South America as well as college radio in the US and Canada.

The This High EP is a difficult one to review, because there are only three tracks on it. All three songs follow the same ’70s groove as Camp Rock. I hear significant influences from The Stooges, T-Rex, and even the Sex Pistols. Razorbats have modernized the pre-punk sound in a way that Green Day or Blink 182 did with their version of pop-punk. Particularly, the song “This High” floats between the two eras with interesting results.

This is not hard rock, nor is it sleaze. It’s pure punk in attitude and delivery. Production is raw and unencumbered with overdubs or flashy effects. I concur with my predecessor’s review. If you like this style, you owe it to yourself to check out Razorbats.

Review by Olivier:
Looking back to when I was growing up as a young lad during the ’80s, I have come to the realization that I was simply spoiled. Many of the best hard rock and heavy metal bands were signed to big record deals and were putting out a new album every year. I remember how disappointed I was when bands would take a whopping two years between studio album releases but at least they usually released a live album during the off year to tidy you over.

Prime examples would be Iron Maiden releasing 1985’s Live After Death between 1984’s Powerslave and 1986’s Somewhere In Time, and Judas Priest releasing 1987’s Priest Live! in between 1986’s Turbo and 1988’s Ram It Down. As the ’80s drew to an end, my favourite bands were starting to take longer and longer to release studio albums and now I am lucky if groups such as KISS, Iron Maiden and Judas Priest even release a new studio album within a five year span. And of course, with record sales way down compared to the platinum glory days of the ’80s, newer bands such as Diemonds, Sister Sin and Crashdïet simply can’t afford to put out a new studio album every year.

This takes me to Norwegian rockers Razorbats whose guitarist Kjetil Fagerlund Wevling advised Sleaze Roxx that he can’t stand bands who release albums only every three to four years. Accordingly, Razorbats released the three song EP This High to satisfy their fans’ craving for new material while the group works on following up their stellar debut full-length album Camp Rock. Wevling also advised Sleaze Roxx that Razorbats‘ intention is not to follow trends and simply play good ol’ fashioned hard rock. Just like on Camp Rock, Razorbats offer a lot of variety with each of the three songs being pretty different from the others. My favorite hands down is the track “The Hurricane” that just happened to premiere on Sleaze Roxx last week! The song starts off with a very ’70s sounding guitar riff before some almost punk like vocals meet the listener and the song is off. Although I definitely enjoy “The Hurricane”, I would like it even better if the guitars sounded a little cleaner.

Next up is the title track “This High” which is more of a punk Sum 41 type track. I don’t mind Sum 41 but none of their albums grace my record collection so it’s not exactly the type of music that I gravitate to. The This High EP closes with a song called “Born In The Fast Lane” which I would have thought would have been a fast paced rocker based on the title but instead, it’s really a ballad / slower song. This takes me to singer Even‘s vocal delivery. Sometimes, his voice really sounds great like such as when “Born In The Fast Lane” picks up a little and prior to the chorus portion of the song. However, I have a hard time getting through the beginning of “Born In The Fast Lane” when Even‘s voice simply sounds a little off at times.

Overall, the This High EP is not as strong as Razorbats‘ prior album Camp Rock but it’s still a good set of songs. Nevertheless, I think that the This High EP serves its purpose since it keeps Razorbats in the limelight while the group works hard to follow up Camp Rock, which is apparently turning into a difficult album to follow up.