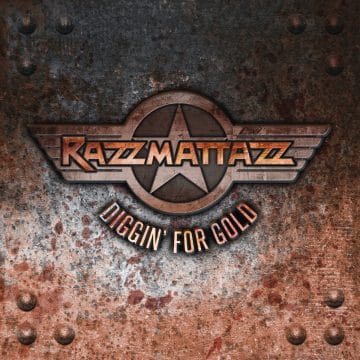 Review:
Razzmattazz are a bit of an enigma to North America. This German band’s third album is as impressive as its previous releases, Rock And Roll Hero (2012) and Sons Of Guns (2014), which were both recognized for winning the “Best New Hard Rock Album“ Award at the German Rock and Pop Awards for those years. To my humble ears, it’s a shame they haven’t broken through on the mainstream world stage. Most of their press is in German, so all I have is the music. I don’t mind that at all.

So let’s explore Diggin’ For Gold. Many of the tracks feature AC/DC like guitars and relative Brian Johnson vocals. And that’s a good thing, because Razzmattazz delve into areas that Angus and the boys don’t go. Opening track “Diggin’ For Gold” has a great sound and blasts off in a second. It has a modicum of sleaze combined with a dash of biker rock. “Older Than Dirt” sure sounds like AC/DC in the Black Ice era.  It’s about the guitar line, and the rest of the band just plays along.

On the other hand, “Bad Girls, Good Lovin” is an aggressive throwback to the ’80s. A tad Mötley Crüe, with a tinge of melodic rock, and so on. It’s surely guitar driven, with heavy drums and a wicked guitar solo. Good stuff and watch the video below.  Moving on to “All Lights On Me”, it starts off a bit soft. Not a bad mid-tempo rocker with some song and emotion to it, much like what Tesla could pull off. Moving on to “Holy Molly”, all I can think of is David Lee Roth era Van Halen because of the vocals and bass line. The funky delivery is really neat. Track six — “City Of Dreams” — immediately brings to mind Badlands‘ “Whiskey Dust” with Jake E Lee’s loose intros and well considered guitar lines.

I’m still hearing ’90s or 2000s era AC/DC in the next few songs such as “Expect No Mercy”, “Like A Shot Of A Gun” or even the more aggressively associated Airbourne like “Yes I Like It.” But then again, I’m faced with “Hole In The Wall” which actually presents me with a Wild Cherry style bass line and play that funky music sound. Really interesting, and quite different from the rest of Diggin’ For Gold.

Razzmattazz have issued their third album, after some great success in their home country of Germany. It doesn’t seem like the boys are seeking out international success, so good for them. As a listener from a few thousand kilometers away, I really like this band. They have an edge to them, with production, writing, and performance abilities…. They know what they’re doing. Well worth investigating.

Official Video for the single “Diggin’ For Gold”. Taken from the album “Diggin’ for Gold”.Spotify:http://open.spotify.com/album/2QOMrKTeWmeZTn153roVZbiTunes:…

Official Video for the single “Bad Girls Good Loving”. Taken from the album “Diggin’ for Gold”.Spotify:https://open.spotify.com/album/7JQBiWogxv4WweDpXWNbyCi…