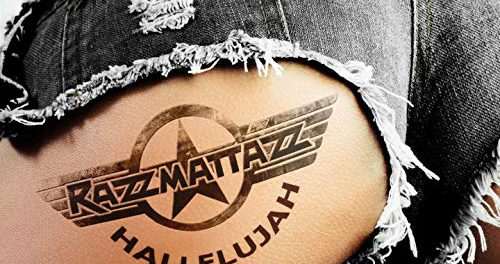 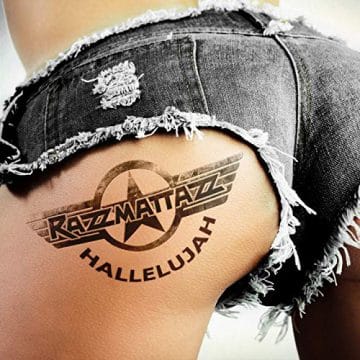 Review:
This happens to be the second time I’ve been fortunate enough to review albums from this band from Reutlingen, Germany. Even though they’ve been going since 2012, their 2016 release Diggin For Gold was my first introduction. They seem to experience continued success in their home country, and as was noted previously, they don’t appear to be particularly concerned about seeking international recognition (even though they are good enough). Of their 2016 release, Sleaze Roxx stated “They have an edge to them, with production, writing, and performance abilities…. They know what they’re doing. Well worth investigating.”

Razzmattazz guitarist Tom Schaupp explained that former bassist Tommy Wiegand bowed out of this new record due to health reasons, and Peter Ucik got to know the band through some sort of nudist swimming pool thing… I didn’t ask further but it seems to be a good story!

Let’s get this out of the way.  There are already way too many covers of the classic Leonard Cohen song “Hallelujah” (KD Lang did it best), and this album is thankfully free of such things. In fact, “Hallelujah” comes in as track number six on the album… sounding more like a modern AC/DC song, with a 4/4 bass and drum line, and a punctuated guitar effort. Guitarist Tom explained, “…The Inspiration for “Hallelujah” came on day as I worked in our rehearsal room. After hours [of work], I had made a single outlet run and then I yelled, ‘Hallelujah. I made it.’ That was the moment. Sounds more like a ‘Eureka’ moment, but I guess I’m reading way too much into this theory so you, never mind.

Speaking of AC/DC, it’s pretty clear Razzmattazz have been influenced by Angus Young and Bon Scott / Brian Johnson.  The album opens with “Gun For Hire” which is a great song based on who the band seems to listen to. “Crazy For Rock And Roll” is a bit more Airbourne in tempo and chorus. Continuing the theme, “Backdoor Man” does seem like an Angus guitar line, but the similarity ends there.  I don’t mean to downplay the song’s appeal or creativity. It’s a fun listen.

There’s a heavier edge to “Lawbreaker” in the sense that it borders on biker rock. The guitars suggest a road worthy track and it’s got the hard edge. Yet, “Cold Rain” presents a bluesy feel with a bit of funky swagger. It does have a vibe to it that isn’t particularly unique, but listenable all the same. “Going Down” has a freewheeling ’80s sensation with its open single chords and vocals — a real treat. Mashing the AC/DC vs Airbourne motif, “Drive By Shooter” combines the best in both. It has the Angus / Brian performance mixed with the Airbourne sound and pace. Going out on a limb, I’d say “Payment Day” and “As Loud as You Can” are the best reflection of Razzmattazz on this album. It doesn’t copy or “sound like” the most obvious references, but more like what I think the band represents. They’re upbeat and interesting songs on their own.

In 2017, I listed Diggin’ for Gold as one of my favourite albums of the year, and it was. Moving forward to 2019, Hallelujah is just as enjoyable, but not particularly innovative. I guess the new album is more of an extension two years ago, rather than offering anything new and surprising. That’s not a dig at the band (think about the success of Bullet) but more of a statement of expectation. When one considers that AC/DC have been more or less recycling the same sound for over 30 years successfully. Alright, that may be true about AC/DC, but unfair to Razzmattazz. If you liked Diggin For Gold, then pick up this album for sure. This sounds like a band that knows its audience and plays for them, rather than blazing new trails. And hey…. good for them. A big thanks to Tom Schaupp for taking the time to chat with me before writing this review.

Provided to YouTube by Believe SASCold Rain · RazzmattazzHallelujah℗ 7hard – a division of 7us media group GmbHReleased on: 2019-02-08Author: Tom SchauppComp…