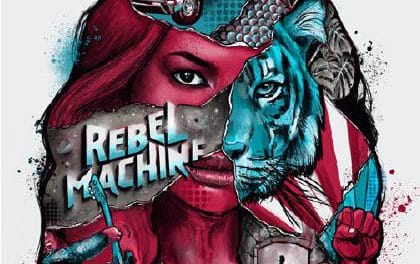 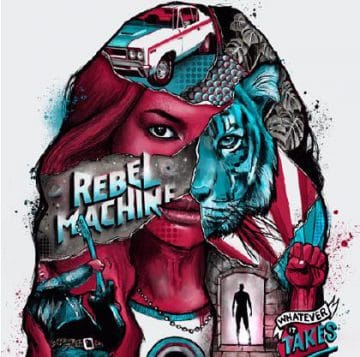 WHATEVER IT TAKES
Released on August 12, 2019 (Big Balls Productions)

Review:
Brazilian rockers Rebel Machine are back at it with their second full release, Whatever It Takes, and are now signed to Swedish label Big Balls Productions. Their first album, Nothing Happens Overnight, turned out to be prescient…. The band has worked hard over the last three years, touring heavily and opening for the likes of Slash and the Black Label Society. Many of the tracks on Whatever It Takes reflect on social and human rights issues in the group’s home country and around the world.

Leading off, “Underdogs” stands tall for the people who don’t have a voice of their own — “… the future is there in bright white lights.” It’s a hard rocking tune well crafted. “Square One” is much speedier, with a wicked opening guitar solo. Singer Marcelo Pereira is already showing range, a lower and deeper vocal than on the previous track. “In My Heart” holds a bit of early Guns N’ Roses in the intro, and revives that feel throughout the chorus. I’m lukewarm on “Dancing Alone.” It feels almost too radio-ready. The harmonic bridge and inoffensive instrumentation does not really get me. This album does get more aggressive with “Full Throttle”, but as the name suggests, it’s heavy and rocks. There’s a fun element to the bass line presented by Marcel Bittencourt in “What You Feel” which drives the song.

And yet, Marcel also leads off the anarchic “Fall into Temptation” with a totally different fuzz tone to his bass. This song is certainly full throttle for Rebel Machine. I’m now into track #8 and I’m still waiting for a ballad to bring me down. Fortunately, “Dead Man Walking” is more mid-tempo and offers some good sing-along chorus lines. “Castle of Cards” wants to do more cowbell, but it seems a bit weak and out of place on an otherwise decent rock song. I’m ok with “California” and “Noyb” as tracks to fill out an album. Finally there’s the ballad “Fences.” Thanks for burying it at the end!

As I stated in my Sleaze Roxx review of Nothing Happens Overnight, Rebel Machine are good listening for awhile, and may fill a hole in the summer playlist. Overall, the band has improved and evolved from 2016. I hope they keep doing so for their next album.

Rebel Machine‘s “In My Heart” video:

In My Heart is the third single from the album “Whatever It Takes”, released by Big Balls Productions.Starring Aldrey Silva and Paul, the catArt direction by…

‘Underdogs’ is a song about minorities and resistance.Video by Arthur CasottiVocal Production by Renato OsorioMixed and mastered by Benhur LimaRebel Machine:…

Square One is the second single from the album “Whatever It Takes”, released by Big Balls Productions.Directed and edited by Celso ZaniniColor graded by Marc…