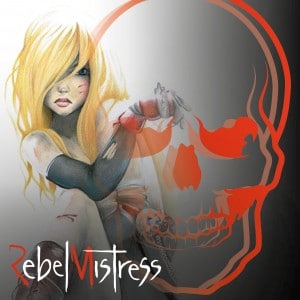 Review:
There are simply more and more new bands coming out of the woodwork these days and surprisingly, the music from these new bands is for the most part really good! The latest upstart band to catch my attention has been Sweden’s Rebel Mistress. I don’t know how old that singer Marielle Tengström, guitarist Daniel Westerlund and bassist Marcus Skantz are but they look pretty young yet play music that is well beyond their tender years.

Rebel Mistress‘ debut EP is the almost perfect blend of catchiness, sleaze and variety all rolled into one. The main downfall is that the band’s debut EP consists of only three songs. What I like best about the band is that the group offers some variety with different tempos throughout their three songs yet have their own distinct sound. The band lists AC/DC, Motley Crue, Led Zeppelin and Guns N’ Roses among its influences but the group’s sound is way closer to old school Motley Crue — especially with the opening guitar riff on “Walk On Glass” — than any of the other three. To be fair to Rebel Mistress, I can’t really pinpoint one band that they really sound like which is a compliment to the young Swedish rockers more than anything else. Sounding original in this day and age is a big plus.

Every track on Rebel Mistress‘ debut EP is a good one that I really enjoy. It is no secret that I have a special liking for female lead vocals and Tengström provides that almost perfect combination of high pitched singing and slightly accented English vocals. Westerlund‘s guitar solos, especially on “Drag You Down” and “Hazy”, are a thing of beauty — not complicated, lots of notes sometimes played quite fast yet memorable and leaving me wanting to hear more. The best part about Rebel Mistress‘ debut EP is that the songs keep getting better track after track as the last song “Drag You Down” is my favorite, followed by the middle track “Hazy” followed by the opening track “Walk On Glass”. The sad part is that the EP is only available digitally.

Whatever the case, I know that Rebel Mistress‘ debut EP is going to be a contender for my top 10 albums of the year and I literally can’t wait to hear more from the young Swedish rockers.