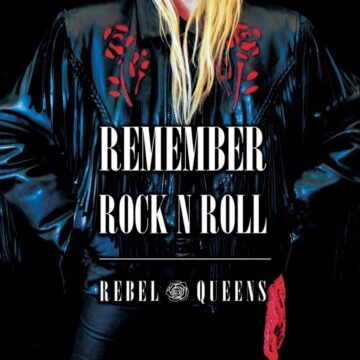 Review:
Part of the “fun” of running the Sleaze Roxx website is sifting through a large number of e-mails from bands, promotional agencies and labels promoting a new album to listen to. Unfortunately, many times, the artist or band’s music does not even fit Sleaze Roxx‘s musical scope so I have had to come up with a “system” for weeding through the weeds without spending too much time. The first thing that I look at is whether there is some sort of description about the music in the subject heading. Any mention of country, black metal, death metal, etc, results in a quick push of the “delete” key on my laptop keyboard. The second thing that I look at is whether it’s a generic e-mail likely sent to hundreds of e-mail addresses or a personalized message to Sleaze Roxx. Obviously, if someone took the time to write directly and specifically to Sleaze Roxx, that is worthy of a closer look. Finally, the third thing that I look at is quite subjective as I check out the band’s name, which can tell me quite a bit about what kind of music that a group plays. It’s kind of like the good old days when you would browse a record shop, take a look at an album cover and almost instantly know what kind of music that you would find on that album.

In the case of Rebel Queens, the e-mail was a personalized one to Sleaze Roxx so I didn’t just “delete” it right away. In addition, there was something about the band name “Rebel Queens” that caught my attention. As I read the e-mail from Rebel Queens‘ lead vocalist Tiffany Beamer, I instantly thought that I should check out at least one of the songs from the band and especially since they had come up with the cool EP title of Remember Rock N Roll. As it turns out, Rebel Queens released their third EP Remember Rock N Roll earlier this year and Beamer was kind enough to give her own description of the band’s four songs from the EP. Part of Beamer‘s description for the single “Ride On Thru” was “a straight-forward rebel-rock song.” Well, that is almost always music to my ears.

I quickly did a YouTube search for the Rebel Queens and noticed that they had released a video for the track “Ride On Thru.” As soon as I heard the opening riff and Beamer uttered a sound with her voice, I knew that I would likely instantly love the entire song and that’s exactly what happened. “Ride On Thru” is exactly what Beamer indicated — a straight forward rocker — that also has some hints of blues as the all-female group, which also includes bassist Pika, drummer Danielle Pearson and guitarist Katie Wyrd, surprisingly slows the track down mid-way into it. Personally, I would have liked “Ride On Thru” to keep that faster pace momentum all the way through the song such as L.A. Guns did so well on “Electric Gypsy” but I think if anything, it shows that the Rebel Queens have a lot more layers to them than just straight forward rocking songs.

Given that I was able to find the Rebel Queens‘ new EP Remember Rock n Roll on YouTube (and it seems just about any album can be found on that medium), I decided to listen to the remaining three tracks with a view towards reviewing the EP on the spot. It’s funny how inspiration can hit you at the weirdest times as for other albums, I can listen to them 20 times and I’m still not sure what I would say about the record in a review. Rather than listen to the Remember Rock N Roll EP from start to finish, I decided to listen to the songs based on which of Beamer‘s song descriptions resonated the most with me. Beamer‘s next enticing description was for the song “Smokin'” which indicated a “rockin’ take on the Boston classic.” I must confess that I only glanced at the words “rockin’ take” and didn’t realize that it was a cover of the Boston classic “Smokin'” until I listened to the familiar melodies of that song. Hearing female vocals and the Rebel Queens‘ seemingly faster paced version of the track was music to my ears. The ladies even turned the end of the song into a bit of a jam session, which is not my all-time favorite thing to hear but kudos to them for trying something different.

Beamer described “Roll The Dice” as having “a dark melody with hints of [Led] Zeppelin and a “Dust In The Wind” theme.” The song does have a dark feel to it and really reminds me of the Vikings television series with its eery atmospheric music when Beamer is not singing. I don’t really feel the Led Zeppelin vibe and the verses with Beamer singing don’t really flow that well with the Vikings theme music — I mean Rebel Queens‘ music — in the other sections of the track. “Eldorado” closes out the album and Beamer described the track as “a slow ride-esque tune about the important things in life like hot cars and cool chicks.” Yes, those are important things when all you are looking for is some fun. “Eldorado” has a real pop feel to it and although it does have a nice melody to it, it leaves me a bit confused on what the Rebel Queens are trying to achieve with Remember Rock N Roll. There is such a wide gamut of styles on the album that I’m not sure quite how to characterize the Rebel Queens‘ sound.

At the end of the day, I would have preferred that the Rebel Queens crank out some more straight forward rockers such as “Ride On Thru” and had they done so, their EP would have been a serious contender for the Sleaze Roxx’s Top Ten Albums of 2021. There is no question that the entire band displays a lot of talent by judicially knowing when not to overburden a song with unnecessary things, letting their instruments breathe throughout the tracks and relying on Beamer‘s killer voice to carry the songs through. Given that the Rebel Queens have already released two albums before the Remember Rock N Roll EP, I did check out a few of their older songs such as “Hey Yeah” and “Wicked Bxtch”, and find that I should be checking out the rest of the band’s material as well. By the way, if you pick up a vinyl copy of the Remember Rock N Roll EP, it apparently comes with three additional live/acoustic tracks consisting of “Hey Yeah”, “Roll The Dice” and “Ride On Thru.”

Rebel Queens‘ “Ride On Thru” video: