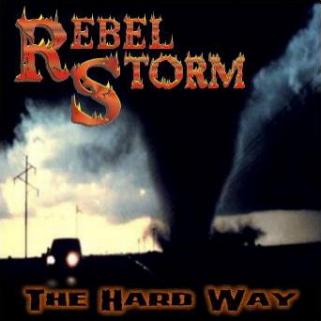 Review:
Rebel Storm kick off their disc with the rocking “No Settled Man”, but things
quickly go downhill from there. The majority of the album sounds more like something
you would hear at a lounge or wedding reception rather than a smoke-filled bar.

The group does have flashes of brilliance, such as the previously mentioned
“No Settled Man”, “Midnight Traveler”, “Firefly Lightnin'” and “Standin’ In the Rain”.
But as a whole the album is just too
harmless and generic. When you check out the band picture though, the members look
like seasoned veterans of the southern rock circuit, its just too bad they play it so
safe.

Obviously Rebel Storm has the talent, but The Hard Way fails
to capitalize on their strengths. The band can be found at
rebelstorm.com, but to me, this
“storm” is more like a light rain, harmless and mostly forgettable.