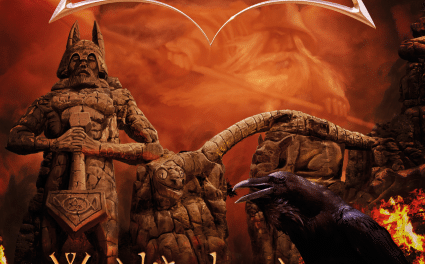 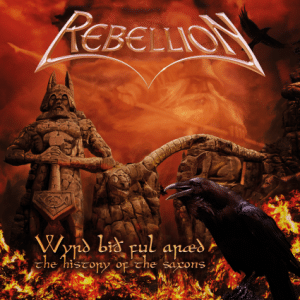 Review:
I admittedly knew nothing about Rebellion when I played their latest album Wyrd Bið Ful Aræd – The History Of The Saxons. The opening guitar riff on the first track “Irminsul” sounded very promising and was building up to what could be an absolutely amazing song. The music on “Irminsul” sounded like classic well played heavy metal music bordering on sometimes heavier Metallica like riffs. Unfortunately, lead vocalist Michael Seifert started singing / growling and from then on, I knew that it would be a struggle to get into the album despite the often amazing power metal music accompanying the songs that Rebellion had come up with.

It became apparent after the opening track that Seifert is able to actually sing rather than only growl since he sounds a lot better during the chorus portion of “Irminsul” so I am quite puzzled why he would adopt his growling type vocals during that opening track’s verses and for most of the album thereafter. The third track “Sahsnotas” — just like the first one — starts off with a killer guitar riff before Seifert opens his mouth again and pretty much ruins the song with his growls — I mean, his singing. By this time, all I could think was that it was such a shame that Rebellion did not have a kick ass vocalist because the music on “Sahsnotas” is top notch at times. I am not big on instrumentals but “Sahsnotas” would have probably been better as an instrumental.

By the time that the sixth track starts, I was again excited by the possibilities with some great guitar riffs to start the song before predictably, Seifert‘s singing essentially ruined the song. The battle between enjoying Rebellion‘s music — and in particular the guitar riffs — and tolerating Seifert‘s growls during the songs simply continued throughout the entire album. It seems to me that Seifert could have got by without relying on his growl type vocals which makes Wyrd Bið Ful Aræd – The History Of The Saxons that much more frustrating to listen to. “The Fall Of Irminsul,” “Hail Donar” and “Blood Court” are all further examples of songs sounding so promising at the start before Seifert‘s vocals pretty much ruin the songs. Multiple listens to Wyrd Bið Ful Aræd – The History Of The Saxons did not alleviate this basic problem.

If Rebellion had more of a traditional heavy metal singer such as a Russell Allen at the helm, I think that the sky would be the limit for these guys because the music on Wyrd Bið Ful Aræd – The History Of The Saxons by itself is at times simply stellar. I also think that with the right singer, Rebellion could find themselves to be among the elite of power metal bands. The fact that I had never heard of Rebellion even though Wyrd Bið Ful Aræd – The History Of The Saxons is the band’s seventh studio album (apparently all with Seifert as lead vocalist) suggests to me that a change in lead singer might well assist in propelling the power metal group to that next level, which would enable them to branch out of the European market. I temper this last paragraph by conceding that I have not heard any of Rebellion‘s earlier albums and although I do not feel compelled at this point to explore any of them, perhaps on those prior Rebellion records, Seifert sings in a different manner.

This song is taken from the album WYRD BID FUL ARAED-THE HISTORY OF THE SAXONS which you can get here:https://open.spotify.com/artist/60XZ1DvTXVTCINO9NKPnLl(…