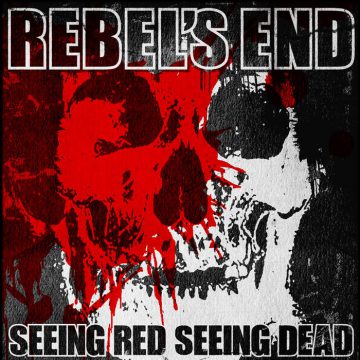 Review:
As I sit and gather my thoughts re-listening (for what seems a selfishly large number of times) to this debut long play from Belgium’s Rebel’s End, I can’t help but be impressed by what these lads have compiled for us to enjoy and I hope with this simple review that some others can become acquainted with and enjoy the band’s efforts as well.

Seeing Red Seeing Dead is best described as a sleaze rock record. I know the band proclaims to metal and punk rock influences as well but there are way more sleazy, dirty, greasy things happening here than punk or metal. Rebel’s End would fit in out well on the Sunset Strip circa 1983-1993 and the various influences are quite prevalent and easily distinguishable. Quite obviously, a heaping helping of west coast sleaze, with an equal part hard rock and a smattering of  each punk and metal, which was quite prevalent for a successful album of this ilk during that heyday –just ask Sebastian Bach. Seeing Red Seeing Dead is a well produced album (especially for a self-released one), the songs are strongly written with immediately remembered rhythms and catchy choruses that cover a variety of topics, but all of which, yep you guessed it, reside on the darker side of town.

The disc opens with a brief instrumental interlude “Exordium” that segues into the almost suicidal beginning of “Live With Hate” which is a double bass driven sleaze metal rocker with massive gang vocals. “Blood On My Hands” continues with a Taime Downe meets Al Jourgensen like wails (singer Jeff James masters this vocal style throughout this disc, but certainly jumps into some nice clean tones too) layered over top of more double bass work and another wall of huge riffage. “We Don’t Need A Reason” is another sleazey rock tune, this one with a bit more glam tinge to it that reminds one of Faster Pussycat‘s “Bathroom Wall” if it was covered by the Gutter Punks. “Don’t Ask Don’t Tell” solidifies the sleazy hard rock road we are speeding down with some tasty timing changes and showcases James‘ vocal prowess with equal parts screaming rasp and clean chorus.

“Black Cocaine” is still sleazy and has its uptempo moments. However, this tune dials the pounding rhythms back a bit for the heavier topic that is obvious from the title. “Psycho Virginteen” is  a favorite as it is super sleazy and reminiscent of Subhuman  Race era Skid Row. “Better Than You” has a sleazed up pre verse rhythm that is very reminiscent of Metallica‘s “Enter Sandman” that just as soon as you get it, the band veers off into their comfort zone of sleazy glam metal. “Flick Of The Switch” is a nice galloping uptempo number with a too catchy pre chorus that drops off into a massive drum riff and another patented vocal wail. “If You Ain’t Shooting” starts off fooling you with a Junkyard riff that morphs into another double bass covered sleaze rocker with a huge nod to “Suicide Solution” in the verse. The disc ends with the ballad “Cramp My Style.” Now it isn’t your cigarette lighter balladeering to your lost or newfound love. Oh no! This slow tempo’d tune has a different message. One, I’d detail here. However, the song title sums it up nicely and quite simply. The tune is a great closer to an album that has been a relentless sleaze metal carnival, fueled by Jack Daniels, razor blades, Doc Martens and enough high octane to fuel a Sundays worth of drag races.

James and company play this brand of hard sleaze metal quite well. Gobs of solos throughout the disc that run the grommet of lightning fast to tastefully trashy and simple. DOL666 is a beast behind the drum kit and Sven Van Neste and Marten Geens compliment respectively with thunderous bass work and additional guitar.

Rebel’s End certainly are not doing anything that hasn’t been done by the likes of Shotgun Messiah, Manitoba’s Wild Kingdom, Zodiac Mindwarp, Lizzy Borden, L.A. Guns, Cats In Boots, The Sea Hags, Faster Pussycat, The Murderdolls and a gaggle more strip and beyond, lessor and greater bands. However, what Rebel’s End have paid homage to within this debut shows real well and certainly has this listener anticipating what comes next.