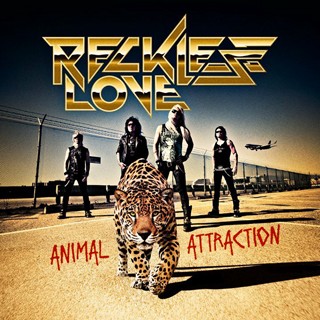 Review:
It feels a lot longer than February, 2010, when Finnish Glam rockers Reckless Love injected their self-titled debut into our record stores. And just like any other band, with its sheer success comes the threat of ‘second album syndrome’ facing the band’s eagerly awaited sophomore release, Animal Attraction.

While still retaining those Van Halen hooks, Reckless Love proves this time around that they’ve matured in sound and it’s evident from the word go. Making for the perfect opener, the title track “Animal Attraction” reincarnates Def Leppard for a brand new generation — containing sugary melodic riffs, its a recipe that’ll satisfy any rock and roll sweet tooth. The album’s second track does exactly what it says on the tin, bursting straight into energetic and super charged ‘speedin’, which gives off harmonious vocal influences in the form of CrashDiet — a Swedish glam rock band that sadly lost their front man Dave Lepard in 2006, whom Reckless Love singer Olli Herman briefly replaced. Making for a perfect opener, this track is bursting at the seams with energy that’ll make you go ‘awwyeeeeahhhh’ outta nowhere.

The album slips prematurely into the slower, and oh so melodic, “Fantasy”, but that’s nothing compared to the surprises on offer with the livelier “Dance” and “On The Radio”, both oozing Eurovision pop-style riffs accompanied by squealing, melodic guitar solos — these tracks clearly back up the sleazy rockers proof of a one way ticket, to a whole new sound.

Reckless Love continue to take their experimental efforts to the next level in the cringe-worthy “Coconuts”, which coincidentally contains a Gwen Stefani moment within its lyrical structure, not intentional of course, but very different to anything we’ve heard from the Finnish pretties before. Songs like “Fight” and “Young ‘N’ Crazy” contain screaming raw-like harmonies that soar sweet and sleazy. The four-piece get away with this by quickly restoring those party rock vibes, through the use of gang vocals, which almost takes us back in time, revisiting tracks from last year’s debut — this is the musical answer to a cock tease for sure.

Overall, Animal Attraction brings a refreshing balance to the recently revived cock-rock sound set by bands like Steel Panther. Reckless Love challenges all expectations of listeners this time round, by stretching musical boundaries and defying any hegemonic hopes of regurgitating 2010’s debut. If you’re a CrashDiet fan you’ll no doubt fall to your knees and worship at the feet of Animal Attraction, with influences bursting at the seams. But unfortunately, what sells well across Europe might not sell as well in countries like the US and UK where that sound isn’t as appreciated — and sadly, this is where Reckless Love could fail to make their mark this time around.