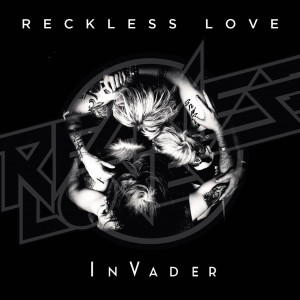 RECKLESS LOVE
INVADER
To be released on March 11, 2016 (Spinefarm Records)

Review:
This review is done with the help of my partner and best friend Josée. You’ll understand why in a moment. There is some great sleaze rock on this record from Finnish band Reckless Love. “Hands” reminds me of ’80s Shotgun Messiah with “Bop City” or “Shout it Out” guitars. Olli Herman sounds much like Zinny J Zan and the guitars reinforce that. “Bullettime” is a flat out rocker and doesn’t pretend to be anything else. “Let’s Get Cracking” is also cracking hard core sleaze. Decent stuff and worth a listen when the album is released on March 16th.

Then we move on a bit. “Rock It” has a Def Leppard intro with a Poison chorus. “Destiny” is alright with a Leppard “Animal” kind of chorus. “Keep it Up All Night” has a strange digital drum sound to it which puts me off, and a wispy synth chorus that does nothing for me. I’ll accept it as throw away filler. But that’s pretty much it for sleaze, or even decent hard rock.

The love for Reckless Love continued with the glam rockers’ 2013 follow-up album Spirit landing at #6 on Sleaze Roxx Readers’ Top 20 Albums of 2013 where Sleaze Roxx stated: “By treading further into glam territory than his former band ever did, Herman and company take listeners back to the teased hair, tight pants and excessive make-up of hair metal’s glory days. With sugar-coated riffs, sing-along choruses and crystal clear production, Reckless Love is the type of well-oiled machine that would have been a radio staple in the late ’80s. That may not be the case in today’s segmented rock scene, but Reckless Love have carved themselves a niche that any young glam band can only dream of.”

And here is where Josée comes in. She is a Top 40 radio music fan and could identify the next several songs by comparison, when I just gave up. The album’s opening track “We Are The Weekend” sounds much like a Canadian pop rock band Hedley song. The first release “Monster” is, as several astute Sleaze Roxx readers said, very Lady Gaga, who also ironically had a hit called “Monster.” “Children Of The Sun” is a bizarre romp through synth pop — think ’80s OMD or Glass Tiger meets Pet Shop Boys. Yes, it’s that odd. There isn’t even a guitar until over two minutes into the four minute song. That is embarrassing, but it gets even worse. “Scandinavian Girls” is apparently a response to “California Girls” — David Lee Roth or Katy Perry, I’m not sure — if done by Jason DeRulo and some anonymous boy band. I just can’t explain it accurately because I don’t know that type of music well enough. Thanks Josée !

I honestly don’t understand this album by Reckless Love. If they had laid heavy on ballads or mid-tempo rock songs, it would make sense from a mainstream sleaze rock point of view. But going from ’80s fueled sleaze to ’80s greased synth pop? All in eleven songs clocking in at roughly 45 minutes. The band talks in their press releases as doing homage to such legends as Alice Cooper and Mötley Crüe but also having distinctive parts that scream of the influence of such ’90s pop giants as Backstreet Boys or Britney Spears. Well ya, but to a single listener, they’re way off base. You can’t expect a Crüe banger to get on board with Britney Spears. Simple fact.

I’d ultimately like to recommend this album for its sleaze contents alone, but that only equates to about four, maybe five out of eleven tracks. It’s best to pick and choose which tracks you want to purchase for this album.