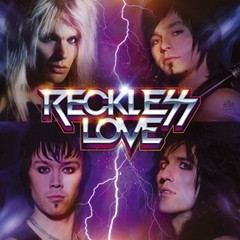 Review:
My expectations for this Olli Herman fronted band (who’s claim to fame is that he recorded an album with Sweden’s own Crashdiet under the name Olliver Twisted) weren’t that high to be honest. Boy, was I wrong! The moment I popped this CD into my PC I was blown away.

Gone are the amateurish vocals that were (unfortunately) evident from time-to-time on Crashdiet‘s The Unattractive Revolution. We can hear Olliver Herman actually singing now, with full lungs and melody in his voice, which is definitely caused by his involvement in writing the material for this album. The other guys are not marginally in the band though, even if they have a ‘superstar’ in the group — they kick ass and have loads of talent.

From the opening chords of “Feel My Heat” I knew that I was wrong in thinking that this would turn out to be an average CD. The first three songs alone are definitely worth the money in my opinion, and they make for a great start to the album. The second song, “One More Time”, is actually Reckless Love‘s second single and is much better than the first single “Beautiful Bomb”, which, while it is cool, may be the weakest track on this brilliant release. My favorite though is “Badass”, which likely won’t be released as a single/video because of the use of profanities in it. The only ballad on this CD has the most unexpected title, “Sex”, but it definitely isn’t your average power ballad. It is done in a similar way as BlackRain‘s “No Forever”, just more melodic.

That is actually one of the cornerstones of this debut CD – melody – and Reckless Love have it in enormous quantities. A melodic vocal delivery, with just enough screaming and lots of gang vocals, great guitar hooks and keyboard harmonies layered over very powerful and rhythmic drums, accompanied by just right amount of bass, and all of that recorded, produced and mixed very professionally, will leave you satisfied if you are fan of this kind of music. But Reckless Love also have quite a lot of ‘cheese’, which may in fact turn some of the listeners away. I liked it, even though this CD is a cheese-fest sometimes. If I would have to compare this album to some other recent releases, I would compare it to H.E.A.T.‘s Feel The Heat. Both are great, and done in a brilliant way in my opinion. Out of the older CD’s it is similar to Danger Danger‘s first two LP’s.

If you are a fan of Feel The Heat, Bon Jovi, Hysteria, Open Up And Say…Ahh!, Danger Danger and The Final Countdown then you’ll love this new one from Reckless Love!