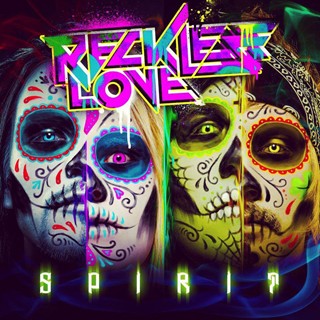 Review:
When golden-maned Viking love-god singer Olli Herman said, “I think we’ve outdone ourselves on this record,” he wasn’t wrong. Swaggering young blades, Reckless Love, emerged from the frozen hinterlands of Finland in 2010 with their eponymous debut on a roaring rampage of sexually supercharged sleaze rock. Two years on, with another hot blast of saucy hedonism and sugar-coated riffs, this follow-up is a huge step forward for the Nordic rockers. As musicians, they’ve matured largely in sound since the frosty reception of their last release, 2011’s Animal Attraction, a slow burner which on the other hand is now certified gold.

Those that disliked Animal Attraction, but adored the band’s debut, need fear not, for on their third album Reckless Love have elected to turn this into quite the piece of work, serving up a delicious platter of familiar thrills, with unseemly relish and confident swagger. As with all their previous releases, Spirit sees Finnish producer Ilkka Wirtanen at the helm and he’s done a fantastic job of producing what can only be described as a hair metal fan’s wet dream. It has power and energy, with crowd pleasers by the bucket load.

While catchy number “Bad Lovin'” nods towards their merry-metal roots, fast percussive shredder “Metal Ass” is the flash in the pan for Reckless Love. Owing more to thrash than sleaze, it’s 70% Metallica, 20% Skid Row, and sounds nothing like Reckless Love. Old-school purists will hate it… Good! Going straight for the jugular with voodoo opener/lead-off single “Night On Fire”, Spirit starts as it means to go on and has Eurovision Song Contest written all over it. It’s clear the band’s time on tour with the Black Veil Brides last year has paid off, as they polish off that band’s gang vocals on “Bad Lovin'” — a catchy, energetic ‘nah, nah, nah, nah, nah, woahhhh’ Euro-pop metal hybrid, resurrecting the heavy chugging riffs from their debut’s “Bad Ass”.

Salacious innuendo “Favorite Flavor” is a jolly good romp and cause for an undeniably bout of air fist pumping. It’s catchy and poppy, but the proof is in the pudding — the result here being cheese on toast with lyrics like, “The taste of your hot lovin’ is so intoxicating” and “I wanna eat you up alive, your my favorite break”, while “Sex, Drugs & Reckless Love” is a fond analysis of groupies, debauchery and Herman‘s hopeless-romantic charisma. Like an orgasm in climax, Reckless Love‘s revved up brand of California dreaming is hard, fast and energetic, but no real heavy metal record is complete without a power ballad or four. Larghetto numbers “Edge Of Our dreams” and “Hot Rain” act as the calm before the storm, amidst the 24 hour non-stop party-pomp. There are plenty of Van Halen moments on Spirit to send the likes of Eddie Van Halen running for cover, thanks to guitarist Pepe Salohalme‘s unerring finesse, whose “Hot Rain” solo worships at the altar of Prince‘s epic “Purple Rain”. But its slushier numbers “Dying To Live” and “Runaway Love” that nod towards the trendy, gloomy, gothic sound of Finland — musically this is H.I.M, but vocally these tracks sail dangerously close to The Rasmus‘ Lauri Ylonen.

It’s no secret that Reckless Love‘s crimes are many, choosing to wear their influences not so much on their sleeves but as giant placards framed in sequins. Enter “I Love Heavy Metal”, a lyrical medley shamelessly hat-doffing an epitome of Sunset Strip forefathers, with skits reminiscent of ’80s hits and skillfully strung together by song writer Salohalme — “I was made for lovin’ you, I’ll rock you like a Hurricane…” and “Runnin’ with the devil and the girls, girls, girls…” Not to mention the track’s opening salvo, where Jalle Verne‘s bass-driven, Poison-afflatus is all but lifted from the steady beat of “Unskinny Bop”. Owing more to Megadeth than Motley Crue, and by far the heaviest line Reckless Love has crossed, thrash-laden “Metal Ass” takes amps back up to 11 — so meaty, it resembles a nice juicy steak that you just can’t wait to get home and stick on the grill, and crank up the heat while it sizzles (unless your vegetarian of course, then your most likely reminiscing away to Morrissey… or someone). Every song here will work live, but energetically super-charged, catchy, fast, and confident, foot-stomping banger, “So Happy I Could Die” should inspire the lustiest of sing-a-longs.

With platinum-plated potential, this third effort from Reckless Love could result in one big chart explosion. And if their catchy super-charged debut was enough to stimulate a fan base in practically every corner of the universe, then Spirit could quite well be the secret ingredient to Reckless Love‘s magnum opus. Step aside hard-rock resurgence, for the new age of merry-metal has officially landed.