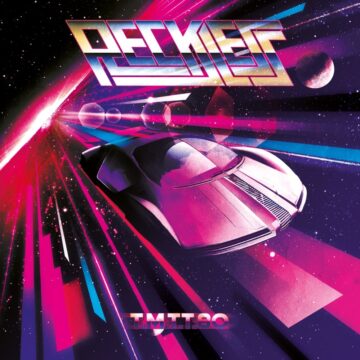 Review:
Italian hair metallers Reckless will be releasing their album T.M.T.T.80 complete with obviously made up band names and neon cover art that could have come straight from a Back To The Future promotion.

Title track “Take Me To The 80’s” kicks off proceedings well and has a real White Lion / Poison feel to it , particularly in the neat harmonies, and is a more than pleasant opener. Unfortunately , “Countach” has such a similar riff to the title track that renders it rather nondescript and unmemorable. Things don’t improve much with the shouty, pseudo ’80s rap style “Workout” or the rather plodding , mid-tempo “One Night Together” either, until at last they up the tempo and give it some real oomph with the anthemic “Chic & Destroy” which is probably destined to become a single, if it hasn’t already.

Things continue to improve with the Britny Fox-esque “Rock Hard (In My Party)” that wouldn’t have been out of place on that band’s first two albums, which, in my book, is a huge compliment. The rather grandly stated “We Are The Rock” is rather nullified by being a simple, ordinary chant along that really doesn’t go anywhere, before more Dizzy Dean Davidson stylings on the excellent “Red Lips” which, to me thus far, is  the standout  song on here.

“Raise Your Fist” is up next and is a rather growling, mish-mash that doesn’t really seem to know if wants to be a chant or a rocker and ends up being neither. The intended lighter waving, lovely ballad “Tonight” gives way to another tribute to days gone by in “Back In Time” — a rollicking extended rocker that is probably where the album should have ended, but they decided to close with another rather anonymous chanter in “Scandalo” therefore completely negating the opportunity of bookending the album with nostalgia related tracks.

The production is patchy but improves on the second half of the album and the rhythm section of bassist Jack Chevy and drummer Mikki Mix (yep, honestly) are solid throughout. The twin guitars of Alex Jawbone and Dany Rocket work hard — although the rather unnecessary extended solos on some songs did become a little tedious for me,  at times. Vocalist A.T. Rooster does have a fine voice, especially on the Britny Fox type tracks, and is ably assisted by some nice band harmonies throughout.

So did it take me back to the ’80s? Not really, but the idea was nice and the intention is honourable, but sadly, although there are several very good songs on here, there is far more filler than killer and that’s a great shame.