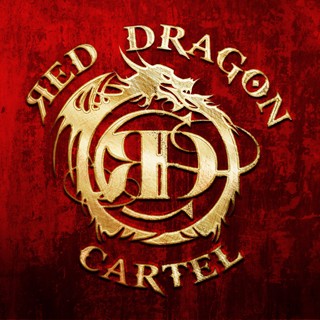 Review:
After many years of self imposed exile, Jake E. Lee returns with a new band called Red Dragon Cartel. The former Ozzy Osbourne and Badlands guitarist has been out of the metal scene for quite some time now, but with this release you really have to wonder why he waited so long to come back! Teaming up with Harem Scarem‘s Darren James Smith, Beggars & Thieves‘ Ronnie Mancuso and Black Betty‘s Jonas Fairly, Red Dragon Cartel have created a very strong, melodic, and thoroughly enjoyable CD. The ten tracks contained on the self-titled album are 45 minutes of blissful metal music that will warm the heart of any sleaze rock fan.

The album kicks off with the outstanding and very upbeat “Deceived”, which features a riff that is eerily reminiscent of “Bark At The Moon” — it makes you wonder what Jake E. Lee could have done if he was actively in the game over the last 25 years. There are numerous guests on this release including Robin Zander and Tom Peterson of Cheap Trick, Paul Di’Anno of Iron Maiden, and Sass Jordan to name a few. The guests on the album are not window dressing, their contributions are real collaborations and not some contrived weak participation in name only. “Feeder” for example features both Zander and Peterson and the result is metal pounding delight — not really what you would expect from the duo.

“War Machine” sounds like something original Black Sabbath might have done as Smith channels his inner Ozzy Osbourne on the vocals. And though it is reminiscent of something like “NIB”, Red Dragon Cartel take the song to a slightly different place that is respectful and yet adds something more — they aren’t ripping off Black Sabbath, just using the heritage constructively and creating something addictive. The best song on the album is “Shout It Out” — it sounds nothing like anything Lee has done before and could compete with any metal heavyweight from the ’80s. This is meat on the bones for metal carnivores — bang away people!

Probably the best characteristic of this album is that it never repeats itself. There is an element of musical diversity, even within the metal genre, that is sorely lacking in many other current releases (Airborne for example). The songs don’t sound like the one before or after, and even though this is heavy metal is it very diverse stylistically. I am sure having the guests on the release have something to do with that, but even songs that are from the core members are not repetitive. There is no formula or pretense here, just well done heavy metal that seems from a long ago age.

The back cover of the album contains a band photo — a picture that shows most of the members looking serious, except Lee who is wearing a very Van Halen-esque shit-eating grin. He has every reason to be grinning, as this is an excellent reintroduction for the guitarist to the world of heavy metal. Red Dragon Cartel is a very strong release that is definitely worthy of purchase — trust me, you won’t be ‘deceived’.