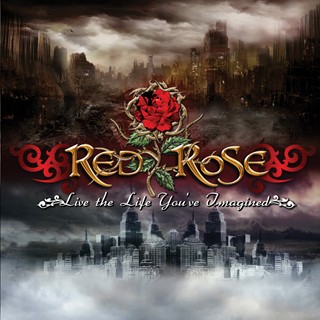 Review:
Red Rose is a melodic hard rock group based out of Israel who, for the record, have tried very hard to duplicate the sound and style of Western AOR bands.

Despite having decent backing in Bakerteam Records, who have ties to the European label Scarlet Records, Red Rose‘s attempt to emulate the days of big choruses and bombastic, slickly produced albums failed to hit the mark. Part of the reason is that you can’t pretend to have been there if you really haven’t — therefore Live The Life You’ve Imagined is no more an ’80s album than Dokken‘s Shadowlife is a grunge album.

Live The Life You’ve Imagined does have its moments, but they are few and far between. “Turn Back Time”, “Name On The Stone”, and “Last Drop” are the standouts, but they pass by quickly as they are the first three tracks on the album. Another thing that I should point out about Live The Life You’ve Imagined is that it clocks in at a little over 30 minutes, making it appear as if this album was thrown together quickly, which in turn hurts Red Rose because they didn’t release a quality product — and for a new band that’s not good at all.

In short, Red Rose tried to reach for the AOR heavens but failed to get any higher than their arms would reach above the heads. I wouldn’t count Red Rose completely out though, because there is potential here. I’d be curious to hear the band’s next record, and I expect a lot of growth.