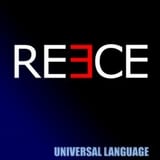 Review:
Don’t let the uninspired artwork fool you, the music on Universal Language is anything but. This CD is the brainchild of vocalist David Reece, a man who fronted both Accept and Bangalore Choir, and seems have turned into somewhat of a work-a-holic since disappearing from the scene for a few years.

What this CD sounds like to me, and this isn’t a bad thing, is a David Coverdale solo outing. Reece sounds so much like Coverdale at times that it is uncanny, and other times I’m reminded of Glenn Hughes – a vocalist really can’t go wrong if he sounds a bit like those two legends. The twelve songs presented here also show a wide spectrum of musical tastes, far more varied than Reece‘s previous recordings. Of course that means that there will be a few clunkers mixed in with the gems, but for the most part I am impressed with this album as you can tell it was a labor of love.

The album kicks off with the Whitesnake inspired “Before I Die”, which makes for a strong and melodic start. After the moody “All The Way” comes one of the disc’s highlights, “Flying Close To The Flame”. That track is up-tempo and has a killer chorus that anyone can sing along with. “The River” is another cool track, which has a Warrant “Uncle Tom’s Cabin” type intro before tuning down, changing tempos, and then rocking throughout. “Rescue Me”, “We Were Alive” and the beautiful acoustic ballad “Queen Of My Dreams” find Reece singing from deep within his soul, and show that his voice has definitely stood the test of time.

David Reece could have played it safe with Universal Language, but instead has taken a slight detour. Fans of his previous works/bands will be able to find enough on this melodic rock CD to keep them happy though, even it isn’t a direct copy of his more well-known releases. This CD represents David Reece expanding his horizons without turning his back on his past, and is a welcome addition to his recording legacy.