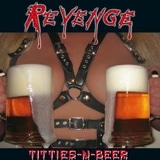 Review:
As much as I’d prefer not to work for a living, I’m sometimes fortunate with my job in that I get time to listen to CDs or music online at work with headphones on, and no one has a clue what I’m doing. But when you suddenly start laughing for no apparent reason, my boss kind of figures out I’m doing something other than actually working. Some of the songs on Revenge‘s latest CD Titties-N-Beer sure had me giggling.

Revenge has two singers – a male and a female who take turns at lead vocals. Thankfully it’s the chick, K. Chante (aka Kim Solak) who does most of the singing, because whoever told the guy here that he could hold a tune was lying. K. Chante isn’t much better, but has moments of sounding not too terrible. On the opening track “Anyway Anytime” (a Wrabit cover) she sounds a bit like Blondie gone wrong.

With Titties-N-Beer Revenge have tried (and failed) to cover ‘Surrender’. Now there aren’t many people into rock music that don’t like the Cheap Trick classic, and I never expect anyone to pull off a cover version that would please me and Revenge are no exception. But these guys really take the cake for having one of the flattest efforts I’ve ever heard. You can’t even tell what the song it actually is to begin with.

Their cover of Nick Gilder‘s ‘Hot Child In The City’ isn’t as dreadful as I was imagining and this is as good as Chante gets, but she keeps slipping back into a high-pitched, little girly sounding style and the band can’t seem to resist changing the last line in the song to a childish “hot child with big titties”.

The song ‘Titties-N-Beer’ itself is just laughable which with a title like that, I guess you can’t expect much more and I suppose it’s meant to be a tongue-in-cheek laugh. With lyrical genius such as “titties-n-beer” (repeated a 100 times), “show us your tits” and “I like big titties and I drink a lot beer” and that’s it. Thankfully it’s only about two minutes long. No points for originality in lyrics for this one, in fact creative lyrics or songs with more than a repetitive two or three lines are hard to find here.

So who do Revenge sound like? They describe their sound as ‘hard rock with a fresh modern sound’ but it’s sort of pop rock. Damned if I know really, but it is humorous stuff.

Titties-N-Beer, while not exactly horrible, just screams of being an amateur effort. It’s more amusing in the way you might go to see some cheesy cabaret band or a disc you’d put on at a drunken party which is so cringe-worthy it’s funny.