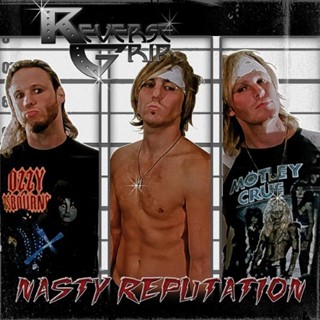 Review:
Reverse Grip is a Canadian rock band made up of three brothers and influenced by the party anthems of the eighties. Like those earlier bands, they wear their bad attitude on their sleeves for all to see and sing about it for all to hear. Their debut four-song EP is titled Nasty Reputation.

It takes only two listens for the title track, “Nasty Reputation”, to stick in your head. Catchy is a gross understatement of the bands ability to marry a hook and melody, and this song proves it. Dru Broda‘s vocals switch from melodic to classic rock with a hint of punk, all with ease. The guitar solos from Sean Broda and even the cowbell, played by Dylan Broda, mixes well, creating a recipe for an addictive tune. The band released a video for this first track that accompanies the song nicely, showcasing the band in action without taking themselves too seriously.

Next up is the song “Raise Your Fist”, a blistering rock anthem made to kick-off any set list. With lyrics “living fast and dying young” and background “HEY! HEY!” during the chorus it’s hard to listen to this song and not visualize the fists pumping in the air. The slow down and grind it out middle of this song is a nice change of pace before regaining momentum full speed ahead. The third track, “Singapore Sling”, has more of a classic hard rock sound with a heavy riff and the most powerful vocals on the EP. Finishing off Nasty Reputation is “Take Me To The Limit”, another fast rocker similar (in a good way) to the title track that promises nights of switchblades, knives, models, and partying till 8 a.m. Again, there is a fair amount of cowbell on this song, which at first sounds like too much, but then it sort of works — if this continues there may need to be a cowbell intervention.

It is clear from this EP that Reverse Grip knows what they want from their music — eighties style guitar, party anthem choruses, and over the top lyrics; resulting in addictive rock and roll that drips of sex, booze, and mayhem. It goes without saying that this approach works on Nasty Reputation and I look forward to seeing what is next for this band.