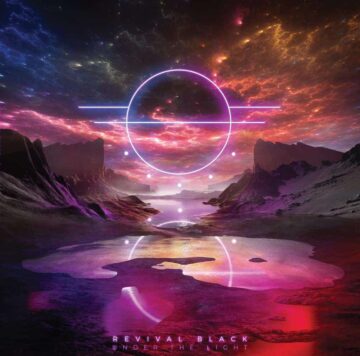 REVIVAL BLACK
UNDER THE LIGHT
To be released on August 26, 2022 (TMR Records)

Review:
Judging by the detailed and comprehensive press package issued by TMR Records, great things are fully expected of Liverpool, UK’s Revival Black and their third release, following 2019’s Step In Line and the next year’s Live In Your Lounge, with some even going so far as to proclaim them squarely at the forefront in the future of the classic rock genre.

“Believe” has a real throw everything into the mix feel to it, before the gears are shifted in a massively upward motion for the hard driving, slightly Southern rock tinged brilliance of “Take You Out” and the impassioned, almost Shinedown-esque “See You Again”, which fully illustrates Dan Byrne’s stunning vocals and the tightness of the band as a whole. This is further consolidated with the current (at time of writing) single “Broken Home” and the acoustic led, plaintive and genuinely heartfelt beauty of “Hemispheres”.

“Under Fire” has a real dirty blues atmosphere and comes complete with fine sleazy guitars courtesy of Alan Rimmer and Adam Kerbache, before “Left of Me” which, to me, had slight touches of Alter Bridge but not enough to detract from yet another fine track. “Change My Mind” has another stirring Dan Byrne vocal. “Wrong Side” wouldn’t be out of place in a Whitesnake Come & Get It era setlist, and the swirling, epic album closer “Hurricane” is perfectly pitched in length and emotion.

The production is crystal clear and encompasses what Revival Black are all about, which is hook laden, riff filled rock with huge choruses over often very emotive lyrics. The guitars of Rimmer and Kerbache are superb, and the rhythm section of Jamie Hayward on bass and Ash Janes on drums deserve a special mention for their perfectly understated performance throughout , but it is the powerhouse vocals of Byrne that elevate this album even further off the scale!

I must admit to being more than slightly sceptical when reading some of the claims on the aforementioned press release, but I was wrong! This is very cool, genre-defining classic rock from a band quite clearly at the height of their power as a unit, producing memorable songs that deserve to hit any stellar heights. Simply brilliant!

Revival Black‘s “Take You Out” video: