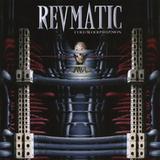 Review:
Canadian band Revmatic tears it up on Cold Blooded Demon. This ten song blast of sonically charged tunes grabs you from song to song.

Stand out tracks include, “A Dying Flame”, “Such A Disease”, and the title track “Cold Blooded Demon”. Revmatic are consistent throughout this album, offering a heavy and thundering approach to their metal. Included on Cold Blooded Demon are touches of punk, Metallica and Stone Temple Pilots, with maybe a hint of Iron Maiden throughout the songs. The vocals are catchy and powerful, and I can only imagine what this band sounds like on stage. These guys know what they want to hear and what their audience wants to hear. Track after track this album consistently rocks and leaves you wanting to hear more, so play this one loud and do not skip a single song.

On the drums Rob Baker lays down a blistering aural assault that holds his band together and hammers a solid beat throughout the disc. Keith Daigle‘s animated bass lines take full charge of the thunderous backline and never lets go. His backing vocals, along with guitarist Jay Hopkins, approach the glory days of heavy metal chorus anthems. Hopkins, along with Nathan Yetter‘s blistering leads, catapults the overall crunch of this band into the stratosphere. Yetter‘s vocals are a power house display of catchy and unpredictable rage tempered with superior vocal control. His voice adds a distinctive sound to the songs and his guitar playing compliments the tunes while never overplaying. You get the sense that he could be flashier but holds back to reflect the cohesion Revmatic has. They function extremely well as a single unit, each one building on the strength of the others.

Cold Blooded Demon stands up to any band out there today and should carry the band well into the future of heavy metal. Of all the tracks my favorite two were “She’s A Drug.” and “Head My Way”. This is one disc I can’t pull out of my CD player. Rev it up!