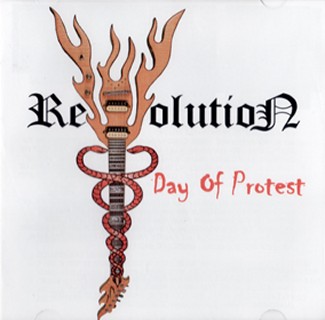 Review:
To be fair to Revolution, I don’t think the band ever planned on having their Day Of Protest CD ‘reviewed’. This album is actually a series of demos mixed and mastered at guitarist Jamie Bekyarovich‘s home — the big capitalized words ‘DEMO CUTS’ on the inside sleeve give it away. The demos were put together when the current line-up of the band was in its infancy almost two years ago and as a way for Revolution to be able to land some gigs. Since then, the Canadian rockers have apparently re-recorded most, if not all, of these songs and their new CD should be released in the coming months.

In addition, during a recent interview with Sleaze Roxx, Bekyarovitch emphasized that, “We’ve all progressed as musicians rapidly and a lot better than what the CD has to offer so — I just wanted to make that clear.” Having seen Revolution play live a couple of times a few months ago, I would say the guitarist provides a fair assessment. That being said, it is nice to be able to hear Revolution‘s songs outside a live setting and other than emanating from their website.

There is no doubt that the sound and production of Day Of Protest leaves a lot to be desired. However, the production was handled by Bekyarovitch when he was about 15 years old in his home, so that is impressive in itself. I have always thought that a good song is a good song no matter what the production sounds like. Sure, some solid mixing and production will enhance a track and can take it from good to great — a prime example would be power metal band Shock‘s demos from the mid to late ’80s that offered good songs but suffered from poor production. Fast forward to 2013, and the release of Shock‘s fantastic sounding debut Once Denied, and you realize that those old songs from back in the day just needed some better production. I think that Revolution‘s demos on Day Of Protest fall in the same boat — the genesis for some really good songs is definitely there but without some decent production, the brilliance can be missed.

Day Of Protest starts off with one of my favorite Revolution songs — “Go Tell The Gods”. I like how it builds up to the chorus and Bekyarovitch‘s scorching riffs. — however, I think that the song could have stayed at the faster pace once there rather than slowing back down to build up to the chorus once again. Luckily, the song pretty much stays in overdrive by the time it gets to the chorus a second time. The guitar solo on “Go Tell The Gods” is a thing of beauty and you can hear the Randy Rhoads influence quite clearly. Next up is “Purple Dragon” which has a real thumping rhythm beat going. You can hear the bass and drums loud and clear for a good part of the song with Luc Michael Mascioli getting some short opportunities to showcase his bass playing. “Village Of Hades” starts off with a strong guitar riff with the rhythm section chiming in. I wish that vocalist Tyler Watkins would have sang throughout the whole song rather than sometimes talk his way through in a “dark” voice. “Iron Sword” has Watkins singing along with the guitar riff, particularly during the verses — just like Ozzy Osbourne used to do, especially in early Black Sabbath material.

The one common element with all of the Revolution songs is the heaviness they possess. It really seems that the band has already found its sound. A lot of credit has to go to the rhythm section of drummer Greg Ciligot and bassist Mascioli, who provide that heavy feeling along with riff master Bekyarovitch. If you take Watkins‘ vocals out of the mix, you would think that the songs are played by much older musicians. “Day Of Protest” is one of the fastest songs on the CD and features once again some great guitar work. One odd song is “Saturn & His Sons”, which feels more like one long guitar solo with the band jamming rather than an actual song.

The Day Of Protest CD closes with a rendition of The Beatles‘ “Helter Skelter” and a live version of the song “Self Destruction”. “Helter Skelter” gets the Revolution heaviness treatment with Watkins sometimes singing in a higher pitched voice, which I do not really enjoy. Having heard Revolution play some blistering cover songs live, including Ozzy Osbourne‘s “I Don’t Know”, I find “Helter Skelter” to be an odd choice of cover. “Self Destruction” kicks off with a solid riff before the rhythm section jumps in. There are some really strong portions in the song followed by some weaker ones, but the one constant is the thumping rhythm section.

Revolution‘s sound can be described as a Black Sabbath rhythm section with Randy Rhoads-like guitar playing — which makes for some interesting and cool songs.
I am looking forward to having Revolution re-release most, if not all, of these songs with some better production. Given the band members’ young ages and bright future, you may well want to snatch up a copy of Day Of Protest despite the rough sound and production before the band breaks through and the CD of demo cuts becomes a difficult to get collector’s item.