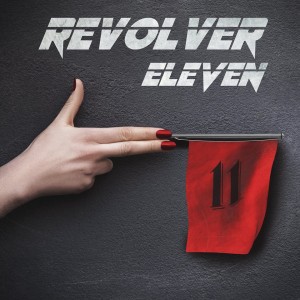 Review:
We at Sleaze Roxx are always committed to keeping our readers abreast of as many bands as we can, and we receive a lot of submissions from all around the world. And sometimes, we stumble across some really good talent that is buried so far in the weeds, it’s a surprise that we find them at all! Revolver Eleven are one of those bands. This newly discovered gem is just about the epitome of raw youthful talent in both playing ability and songwriting. This is boisterous testosterone whiskey infused hard party rock and roll with a big production sound that lovers of blues based circa 1990 rock will enjoy.

Some of the songs are immediately addictive such as “Wicked Woman” — which features a lovely cowbell, “Are You Ready” and “Midnight Rumble” — the latter which opens off with a guitar riff so catchy it would make AC/DC‘s Young brothers envious. “Beer Bogie” seems to take Van Halen‘s “Ice Cream Man” to the next level. You get the idea. Lead vocalist Victor Ehn is comparable to Shane Mansfield from Electric Angels fame although with a somewhat greater range if we take into account some of his high pitch shrieking that appears on Revolver Eleven‘s debut. The band sports two lead guitarists so I’m not sure who has which influences but I am hearing a nice mix of Eddie Van Halen and some Jimmy Page influences. Revolver Eleven describe themselves as high octane heavy rock with modern ingredients. I think this is an accurate description but which leans nicely towards classic rock.

These young Swedish kids have the ‘it’ factor. Give it a listen. You won’t be disappointed. I promise!

Wicked Woman, track 7 from our debut album “Revolver Eleven”. Our music is also avalible on Spotify, iTunes and Soundcloud.www.facebook.com/revolverelevenwww…

Midnight Rumble, track 5 from our debut album “Revolver Eleven”. Our music is also avalible on Spotify, iTunes and Soundcloud.www.facebook.com/revolvereleven…