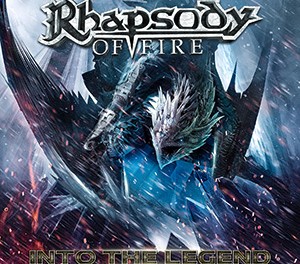 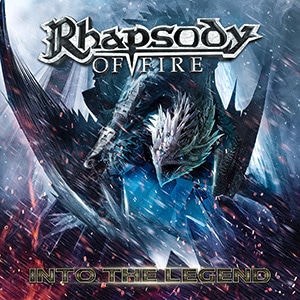 INTO THE LEGEND
To be released on February 5, 2016 (AFM Records)

Review:
Rhapsody Of Fire is back with Into The Legend, their second effort without Luca Turilli. Their previous record, Dark Wings of Steel, was a very enjoyable and accomplished album, and a nice step back into the band’s older – less pompous – style.

I’m happy to report that Into The Legend goes even further back, which shows from the very first song “Distant Sky.” In some places, it reminds me of the sound the band had all the way back during its first Symphony of Enchanted Lands album. It’s nice to hear the neo-classical guitar solos back, and the always impressive Fabio Lione, whose strong vocals are, and always have been, a perfect fit and a trademark for the band. Speaking of the guitars, what Roby De Micheli is doing since the last album and which he repeats on Into The Legend is commendable. He’s not trying to be Turilli but rather be his own man delivering great playing with memorable riffs that fit Rhapsody Of Fire just right. Just listen to his great solo on “Rage of Darkness” for a great example.

One of the things I like best about Into The Legend is that it perfectly combines speed and melody in contrast to some of the band’s other records that have leaned too heavily on one side of that scale. Since Dark Wings of Steel, and again on this one, the band has been able to balance the wide array of elements and styles they use, in good measure throughout the songs. There is some good variety on Into The Legend as several choirs are mixed with some gorgeous classical elements on a song such as “Winter’s Call” while tracks like the title track are speedier and more straight-forward power metal. “A Voice in the Cold Wind” is more baroque-oriented with cool orchestrations while “Realms of Light” displays some amazing keyboards from Alex Staropoli. Into the Legend has a bit of everything, and it’s made the better for it.

The closing track, “The Kiss of Light”, is a 16 minute opus that encompasses everything that Rhapsody of Fire‘s been about through their career. With everything from acoustic guitars and great keyboards to a majestic choir with many tempo changes in between, the song displays greatly the big classic orchestra that accompanies the band during the whole album. Into The Legend distances the two Rhapsody camps even further apart bringing — at least in my book — Rhapsody of Fire to the forefront. As I said in my review of Ascending to Infinity, I believe Luca is going too far with the pompousness but, after all, this distancing is a great thing for us fans because we’re getting two bands that are becoming increasingly different.

The team of Fabio Leoni, Alex Staropoli, Alex Holzwarth, Alessandro Sala and Roby De Micheli deliver once more. Into The Legend is a must for fans of the band as well as power or symphonic metal, and another worthy addition to Rhapsody of Fire‘s already impressive body of work.