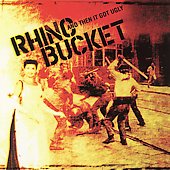 RHINO BUCKET
AND THEN IT GOT UGLY
Released in 2006 (Acetate)

Review:
There are few things in life one can count on. Among them are the sun coming up every day, Vince Neil getting drunk, Michael Jackson doing inappropriate things with children and Rhino Bucket serving up AC/DC influenced three-chord swagger.

For me personally, news of a new Rhino Bucket album made And Then It Got Ugly one of the most anticipated releases of 2006. So why am I just getting around to listening to it now? Well, a PR guy or label representative (I forget which) said they would send a copy of this CD for review. So I waited…and waited…until I got sick of waiting and said, “Fuck it, I’ll buy it myself.”

So a few months late, here I am listening to Rhino Bucket‘s latest platter and I’m not sure what to say. If you’ve ever heard Rhino Bucket before then you know exactly what this CD sounds like. Vocalist Georg Dolivo spits out his lyrics with a tequila-laced attitude that few in rock can match and the rest of the band follows with their minimalist approach. People may say this music is formulaic, and in a way it is. But it delivers in the same way your favorite TV show does every week, or the way your favorite brand of beer always quenches your thirst. Songs like “Welcome To Hell”, “Dead & Well”, “Blood, Sweat & Beers”, the seething “Smile” and the incredible “Hammer & Nail” are fueled by raw emotion, a bad attitude and an infectious groove. How any self-respecting sleaze rock fan can’t fall in love with this is hard for me to comprehend.

Rhino Bucket may have disappeared for a decade, but the sound remains the same. Some things within the band itself have changed – they recruited a Kix guitarist and their drummer transformed from a man to a female (don’t ask) – but the hard rock boogie remains. Rhino Bucket‘s blueprint didn’t change at all during their sabbatical and thank God for that, bands like this aren’t supposed to change. They are supposed to deliver, and on And Then It Got Ugly they do just that. When I purchased this album I wanted to hear the Rhino Bucket of old, and that is exactly what I got – this is one satisfied customer!